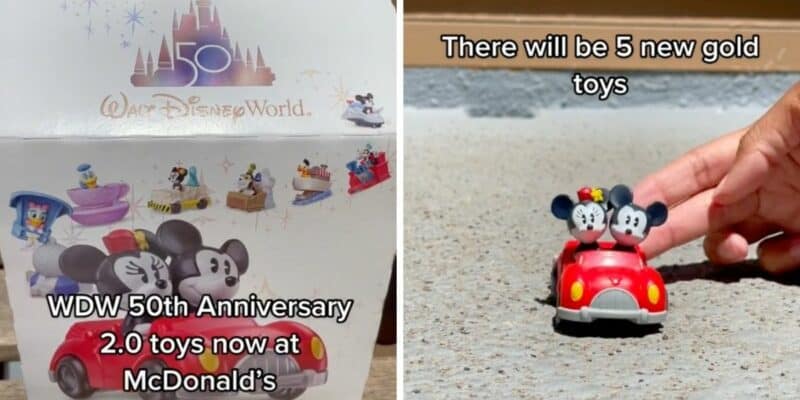 Last year, McDonald’s announced they were teaming up with Disney and are releasing 50 limited-edition toys to celebrate 50 years of magic at Walt Disney World.

For a limited time, many Disney fans flocked to their local McDonald’s in an attempt to purchase a Happy Meal and see which 50th-themed toy they received. After a few months, the 50th toys began to disappear as they were selling out.

Now, it seems that McDonald’s and Disney are teaming up for round two as some are reporting that they are once again receiving 50th-themed Happy Meal toys!

Related: McDonald’s Debuts Disney 50th Toys, But Some Received Something Else

TikTok user itsdwats shared a video to the social media platform saying Walt Disney World 50th anniversary 2.0 toys are now at McDonald’s. Per the video, there will be 5 new toys!

♬ Nothing Can Stop Us Now – Kyle Allen Music

If you plan to purchase a Happy Meal from McDonald’s, we highly recommend calling ahead to see if your location received these new 2.0 50th-themed toys to avoid any disappointment.

Did you go to McDonald’s today? Were you able to get one of the new 2.0 Disney World 50th Happy Meal toys? Let us know in the comments below.