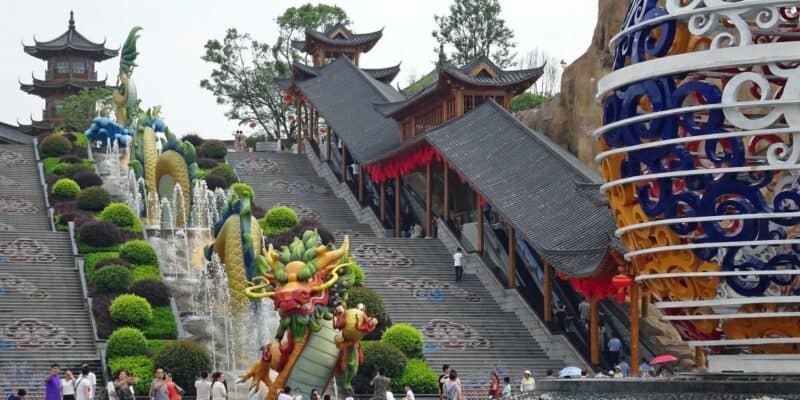 When riding a roller coaster at any theme park, Guests are able to experience one of the most thrilling and exciting experiences there are, and while seeing themselves involved in an accident is the last thing going through their minds, there is always a possibility that something unexpected could happen.

Guests at Nanchang Sunac Land, one of China’s most important theme parks, recently had to go through one of these unfortunate situations. On May 2nd, Coaster Through the Clouds experienced a malfunction that left 18 Guests stuck at over 240 feet on the lift hill of this massive roller coaster. It was not specified how long Guests had to wait before being rescued and evacuated.

Park maintenance and operations teams did their best to rescue the Guests as soon and efficiently as possible, but still, many complained about this terrifying experience.

Roller Coaster Dream 过山车之梦 (@RCDclub) shared a video of the incident on Twitter, where Guests can be seen being escorted down the stairs on the side of the roller coaster’s track. While many viewers commented that there was nothing dramatic about this evacuation, we’re sure that going downstairs at over 200 feet could easily make anyone nervous.

2nd of May, Coaster Through the Clouds at Nanchang Sunac Land was experiencing an evacuation. 18 people were stuck on the lift hill, near the top of it. The park is doing a not bad job on the rescue, while the guests still complained about the “terrifying” experience.

2nd of May, Coaster Through the Clouds at Nanchang Sunac Land was experiencing an evacuation. 18 people were stuck on the lift hill, near the top of it. The park is doing a not bad job on the rescue, while the guests still complained about the "terrifying" experience. pic.twitter.com/53uTIoz6GZ

Nanchang Sunac Land is one of China’s most important theme parks, located in the prefectural city of Nanchang, in the province of Jiangxi, China. It is operated by Sunac China Holdings Ltd., a significant property developer that works in several cities across the country. The park opened in 2009 and currently has five active attractions, including Coaster Through the Clouds, Creep Caterpillar, Python in Bamboo Forest, Soaring Dragon & Dancing Phoenix, and Spinning Porcelain.

It would appear that ride malfunctions are becoming more and more frequent in theme parks around the world, or at least the number of Guests reporting and sharing them through social media has increased in recent years. We recently reported on another malfunction that left Guests at Carowinds, in North Carolina, hanging for about thirty minutes before being rescued and evacuated. Fortunately, there were no Guests injured or left in need of medical assistance in either of these incidents.

What do you think of this incident? Have you ever been evacuated from a ride? Let us know in the comments below!