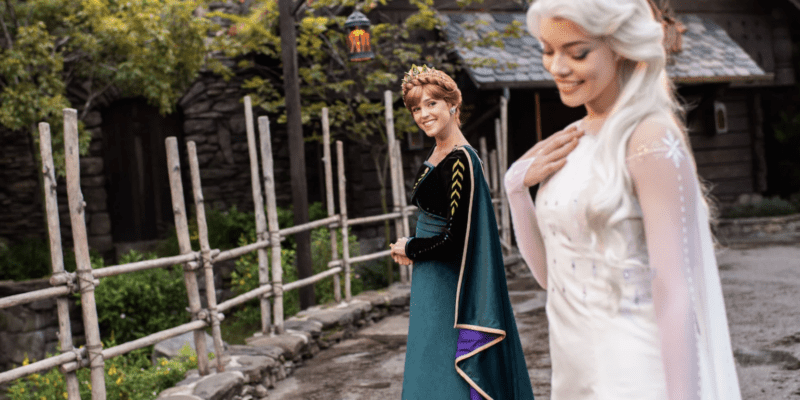 One of the most recent things to come back to Walt Disney World has been character meet and greets. When the Walt Disney Parks reopened in Orlando, Guests were only able to meet characters from a distance. These were just called “interactions” as they were very far apart, and not a one on one experience like many were used to.

Now, Guests can stop by all of the meet and greet locations and give Mickey Mouse and the gang a nice big hug! One thing that many may have forgotten during these close encounters is that kids may say almost anything when they are meeting their favorite character, including their bathroom activities.

One video shared online shows that a young Disney Guest who was incredibly excited to meet Elsa from Frozen approached her she proceeded to tell the ice queen on her bathroom usage for the day. The video cuts out before Elsa could respond but we can see that the performer easily remained in character with the Guest. Many noted that they were shocked by Elsa’s composure at the comment, as it was incredibly hilarious and unexpected! Some others decided that they should create a rendition to “Let it Go” as it pertains to this situation. This interaction would have taken place at the Royal Sommerhus in EPCOT.

Take a look at the interaction below!

Don’t tell me Disney has lost its magic from WaltDisneyWorld

Disney describes the meet and greet experience as:

Get Cozy in the Cabin
Venture north to a charming home fit for a royal welcome from Queen Elsa and Princess Anna.
About Elsa
Confident and caring, Elsa looks after those she loves. She embraces her magical abilities and has found freedom in simply being herself.
About Anna
Spirited and loving, Anna freely gives her heart. She always looks on the bright side and tries to do the next right thing for her kingdom and the people she cares about.

What do you think about this interaction? Let us know in the comments below.