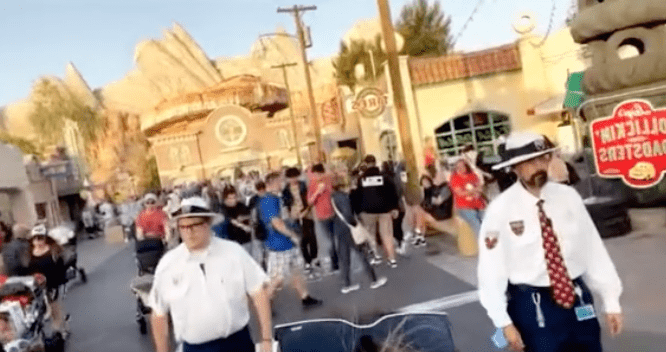 A few days ago, a TikToker posted a video from Disney California Adventure in Disneyland Resort in California, explaining that they were kicked out of the Park on their birthday.

Related: Don’t Do This or You Will Be Kicked Out of Disney

The TikToker claims all they did was ask a question and the Cast Member started giving them attitude. Then, in an attempt to calm the Cast Member down, the Guest touched their shoulder and then they were escorted out.

While it didn’t seem to be in a violent manner, the Guest did admit to touching the Cast Members shoulder. Please keep in mind that placing hands on Disney Cast Members or other Disney Park Guests can result in expulsion from the Park and even police involvement depending on the severity of the situation.

Now, the video continues to gain comments from other Disney fans, all of which are accusing the TikToker is not telling the full story. One user commented on the video, saying:

Yeah no lol you don’t just get kicked out for asking a question.. what really happened lol

Another TikTok user commented on the video, writing:

With someone else chiming in:

I always believe the Cast Member. There’s definitely more to the story then what’s being told. 😅

One TikToker pointed out that as courtesy and decency, you don’t touch others regardless of the situation, writing:

And another Disney fan said:

I think you need to tell the whole story. There’s no way you just got kicked out….. Disney isn’t like that

Guests can also ride WEB SLINGERS: A Spider-Man Adventure and Guardians of the Galaxy: MISSION BREAKOUT, both located in Avengers Campus.

For the current Disneyland rules and regulations, visit the official website here.