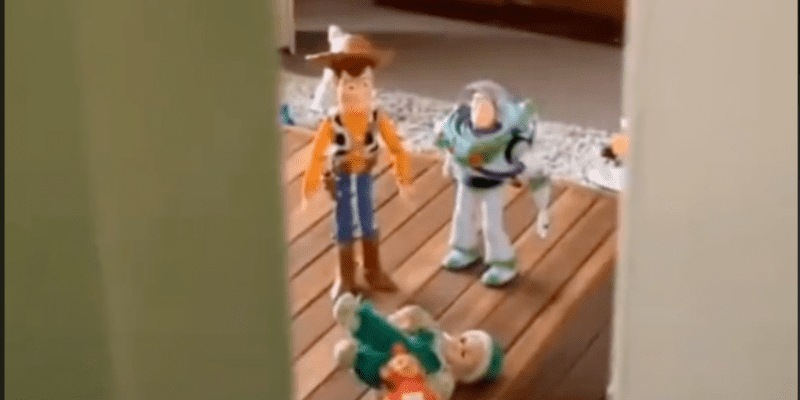 The movies– which are based on Andy’s toys including Woody, Buzz Lightyear, Slinky Dog, Mr Potato Head, Mrs. Potato Head, Ham, Rex, Jessie, Bullseye, and Bo Peep– have become a Disney fan favorite over the years.

That being said, one Disney fan shared quite the experience recently when they claim to have gotten “evidence” of their possessed toys.

As you can see in the video, Woody and Buzz are standing when the door creaks open. At that point, they both fall just as we see in the movies when the toys hear that Andy is coming.

Of course, we know that this is likely just edited. Right? Or are Woody and Buzz really alive? Either way, it’s a fun video to watch and is done very well by the user.

If you’d like to meet Woody and Buzz, you can do so at Walt Disney World Resort. Toy Story Land, located in Disneys’ Hollywood Studios, is an entire area dedicated to the beloved franchise. There, you can enjoy Toy Story Mania, take a ride on Alien Swirling Saucers, and experience the thrill of Slinky Dog Dash. Woody’s Lunchbox is a fan-favorite eatery in the Disney Park and construction is underway on the all-new Roundup Rodeo BBQ restaurant and Jessie’s Trading Post, both of which will be opening soon.

What do you think of this video of the Toy Story toys? Let us know in the comments!