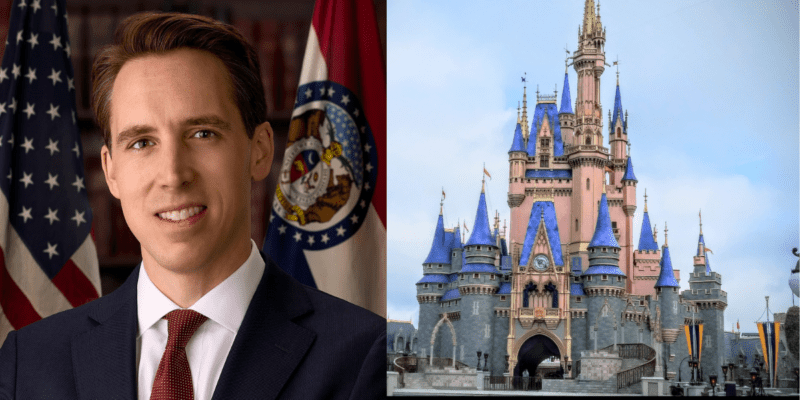 This bill is the latest in what has been widely considered retaliatory attacks on The Walt Disney Company after CEO Bob Chapek publicly condemned Florida’s Parental Rights in Education Act, popularly known as the “Don’t Say Gay” law.

“That is a blatantly unconstitutional taking of property without compensation,” he told Variety in an interview.

Josh Hawley either slept through his time at Yale Law School or knows his proposed taking of Disney’s intellectual property without compensation is flagrantly unconstitutional. Maybe both. What a piece of work!

Josh Hawley either slept through his time at Yale Law School or knows his proposed taking of Disney’s intellectual property without compensation is flagrantly unconstitutional. Maybe both. What a piece of work! https://t.co/Qk0ckyRBw4

According to Fox News, this bill would cap copyright protections for corporations at 56 years. It would be implemented retroactively, meaning the Walt Disney Company’s copyrights lasting longer than 56 years would no longer be protected.

This retroactive removal of copyright protections would most likely include Disney’s iconic character Mickey Mouse, who was protected until at least 2024 under The Copyright Term Extension Act, passed in 1998, which extended copyright protections for corporations from 75 to 95 years. Disney lobbied so intensely for this bill that it was later dubbed the “Mickey Mouse Protection Act” by critics.

One America News Network, a controversial network that has been removed from many traditional cable providers and boasts that it’s favored by Former President Donald Trump, posted an exclusive interview with Senator Hawley about The Copyright Term Extension Act. In the video, Hawley says:

“Disney got a special deal almost 20 years ago now. Their copyrights under the normal terms of our copyright laws were about to expire on some of their Mickey Mouse properties in particular… and they came and lobbied Congress for some special Mickey Mouse carve-outs and extensions, which they got. So I think it’s time to ask ourselves, should we really be giving these mega-corporations that, frankly, have been so hostile to so many Americans, to so many voters, to so many states, and to our basic values, and have in many cases been very willing to ship jobs overseas, should we be giving them special treatment?”

If passed, this bill would have to be signed by President Joe Biden. The White House has not commented on the legislation proposed by Senator Hawley.

Do you think a retroactive removal of copyright protections as proposed by Sen. Josh Hawley is unconstitutional? Let us know in the comments.