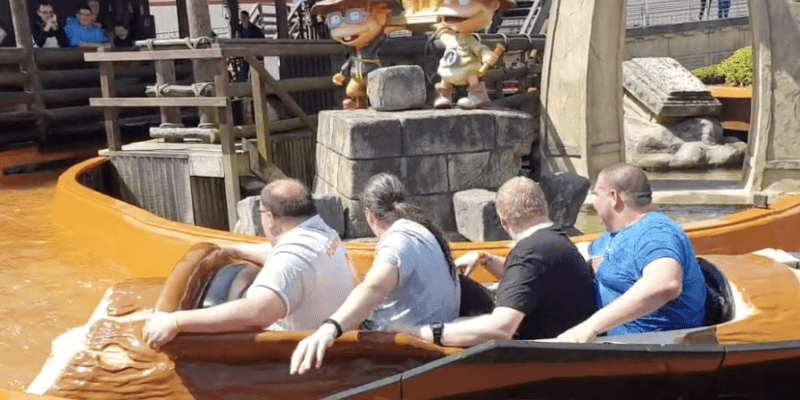 If you go to a theme park, many Guests would not think that they would have to thrust themselves forward to escape a water ride, but that is exactly what happened recently.

We have seen flume rides such as Splash Mountain operate without water in the past. Although Splash Mountain at Disney relies on the water to push itself through the main part of the attraction, where Guests enter the Laughing Place and meet all the characters like Br’er Fox, Br’er Bear, Br’er Rabbit, and more, the drop brings Guests down the steep hill on a track. Because of this, it doesn’t matter if the water is pushing Guests forward, as the track will make sure that happens no matter what.

Blackpool Pleasure Beach is a theme park located in the United Kingdom, in Blackpool. The Park has a ton of thrill coasters like ICON, The Big One, Grand National, Revolution, Infusion, Big Dipper, and more. Plus, they are home to Nickelodeon Land! Meet characters from SpongeBob Square Pants, Paw Patrol, and more when you visit.

The Park describes the land as:

Family thrills and memories that will last a lifetime are assured on Nickelodeon Land! It’s home to 12 amazing rides and a whole host of Nickelodeon characters from the world’s number one kid’s entertainment channel.

Our characters are out on the Team Nick stage each and every day for you to meet & greet them and have your photograph taken!

One popular ride in Nickelodeon Land is Rugrats Lost River. Here, Guests can experience the flume ride attraction alongside the Rugrats! The ride is described as “The adventure begins as you launch into the imaginations of Tommy, Chuckie, Angelica, and the gang and land right in the middle of a wild “Okey Dokey Jones” exploit. This time, the Rugrats are on a quest to find the elusive Temple of Spoon – a mythological and mouth-watering banana split sundae.”

But, perhaps there is a reason this is a kids-based attraction. Claire (@withrazzmatazz) posted a video of four fully grown adults stuck in the ride vehicle as it turned the corner. Since the attraction just uses water to push the Guest forward and they were lodged, they had to thrust forward to escape! Take a look at the video below.

THEY STOPPED THE BOAT

THEY STOPPED THE BOAT pic.twitter.com/knH89cLWWP

Of course, the attraction had to shut down until the Guests were able to escape. We can see that this definitely created quite the spectacle among others watching to see what was going on!

We assume that all four Guests were able to safely escape the attraction as there have been no reports indicating otherwise.

Reportedly, the theme park is said to be “136 times bigger than the Wembley Stadium, occupying a 535-acre land space,” and around 70 percent of the attractions will be undercover to cope with the unpredictable English weather. The theme park would not follow the “classic” castle look like Disneyland to a tee, but would do so with a twist. The Park’s theming is meant to reflect British television and films. The park has been called the “Paramount” Resort by many due to the ties with the production company,  located in Kent.

Have you ever been stuck on an attraction?