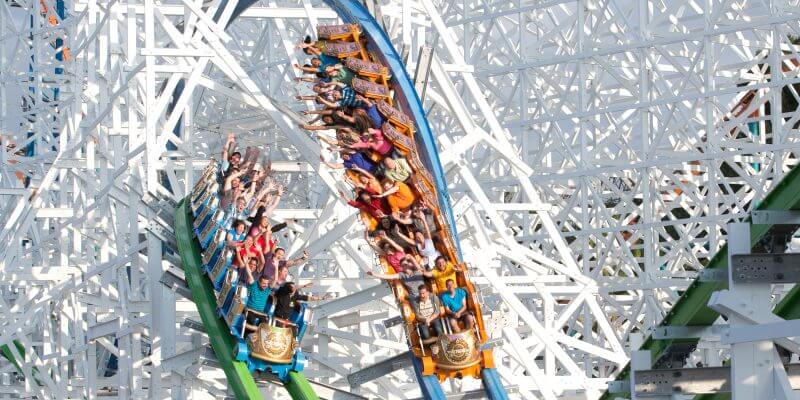 A lover of theme parks and saving money, Dylan had found the secret to enjoying both.

We recently reported on a man named Dylan who took advantage of purchasing a $150.00 annual pass that included admission to Six Flags Magic Mountain, parking, and two free meals per day.

He elected to eat inside the theme park every day for seven years and, as a result, he was able to pay down his student loans, get married, and buy a house. In 2020, the average cost of groceries was $4,942, with an average of $412.00 per month. This does not include the cost of eating out or ordering in, which can easily raise this cost by a couple of thousand more.

While the pass has not been available for purchase for a while, it was renewable for Dylan every year. That is, until now.

“Six Flags announced a whole new pricing system for their passes which have a bunch of people scratching their heads,” Dylan recently shared through MEL Magazine.

Six Flags completely restructured its annual passes beginning this year and that means the $150.00 unlimited dining pass is completely and totally a thing of the past.

Finally, the 2022 Ultimate Pass is $299.99 is the only pass that provides any kind of meal plan. It includes all of the following:

Six Flags recently introduced THE FLASH Pass at its Parks– which is essentially its own version of Disney Genie– that allows Guests to pay more to have the reservation hold their spot in line and enjoy priority boarding opportunities when their reservation time comes.

This change was put in place shortly after Walt Disney World Resort and Disneyland Resort introduced Disney Genie, which has a Disney Genie+ and Lightning Lane option for Disney Park Guests to do the same. As Disney is normalizing this pay-per-ride system, we can now see that other theme parks are starting to follow suit.

What do you think of this pass coming to an end at Six Flags Magic Mountain? Let us know in the comments.