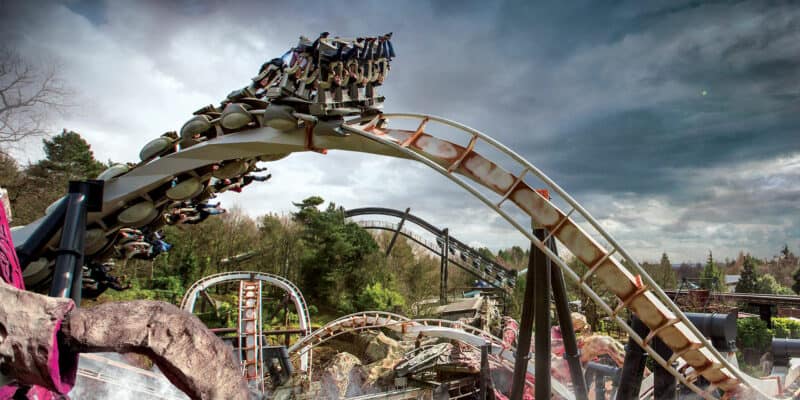 Typically, when Guests are injured in a theme park accident, only sad memories emerge from the tragedy. In one case, however, it seems that two Guests got their happily ever after!

U.K. theme park Alton Towers is full of more than 40 rides, making it an easy theme park to get lost in. Rides like Oblivion, The Smiler, Wickerman, Galactica, Thirteen, Spinball Whizzer, Run Away Mine Train, and more. In 2015, one of the coasters was traveling at a speedy 90 miles per hour when it crashed into the stationary coaster ahead. The incident caused severe injuries for Leah Washington and Joe Pugh, a couple who just begun dating when they went to visit the theme park.

16 riders were injured on June 2, 2015, with five Guests in serious condition. Leah was only 17 at the time and had to have her leg amputated. Pugh also sustained serious injuries, shattering both knee caps. According to The Guardian, “The passengers were left trapped more than 6 meters (20ft) from the ground at an angle of about 45 degrees before they were eventually freed by emergency workers and stretchered away.”

Leah noted that during the crash, she was unsure if she would survive. The publication continued to note that the investigation into the incident concluded that the crash was caused due to inadequate health and safety protocols. Merlin Attractions, the owner of Alton Towers, was fined £5m for health and safety failures.

The judge, Michael Chambers QC, said the safety procedures were “woefully inadequate” and a “shambles”, and that the crash was “a needless and avoidable accident in which those injured were fortunate not to have been killed or to have bled to death”.

The judge rejected Merlin Attractions’ claim that the crash was caused by human error, finding rather that it was caused by the company’s “catastrophic failure to assess risk and have a structured system of work”.

Although the couple endured such a tragedy at a young age after barely getting to know each other, it seems that this incident bonded them further as they just announced their engagement! Leah now uses her social media platforms to tell her story and share her progress as she has had to adapt to life as an amputee. The Barnsley-raised survivor became the face of the lingerie brand Pour Moi in 2021.

Most recently, we have reported on the ICON Park tragedy, which occurred on the Orlando Free Fall attraction. The brand-new attraction released a 14-year-old boy from his ride restraint during the massive drop, which ended in a terribly sad fatality. The ride manufacturer in this case, however, is Funtime, a company that has created various drop towers, including one in Dollywood, which has now been shut down due to the ongoing investigation.

Noel stated, “Going out with a big family the size of ours, it is quite difficult. Especially if you’re in an area where it’s busy, like a theme park where they all just want to go in different directions.”

What are your thoughts on this love story? Have you ever been to Alton Towers?