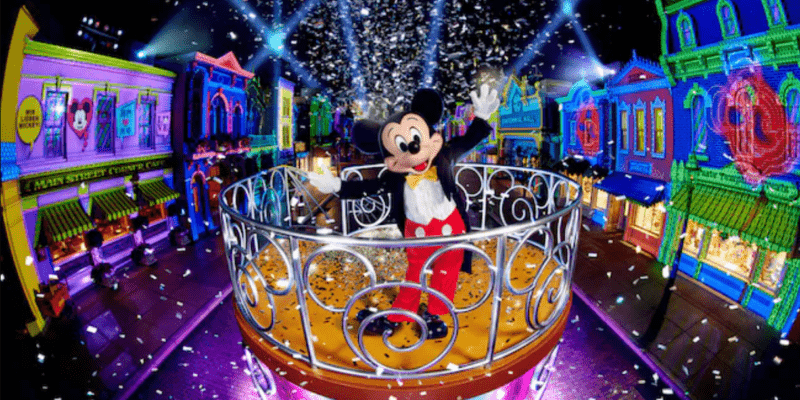 Last night, Guests and fans were able to enjoy a surprise presentation of the Main Street Electrical Parade at Disneyland and a live broadcast on the Disney Parks (@DisneyParks) Twitter account.

However, this beloved parade was not the only nighttime spectacular making a return, as the “We Love Mickey!” Projection Show will also return to Hong Kong Disneyland with significant improvements.

The park has upgraded the spotlight system on Main Street, USA.

A significant improvement of the brightness can be seen in tonight’s performance of “We Love Mickey!” Projection Show.#hongkongdisneyland #hkdisneyland #hkdl #disneyparks #香港ディズニーランド #ディズニー

The park has upgraded the spotlight system on Main Street, USA.

A significant improvement of the brightness can be seen in tonight’s performance of “We Love Mickey!” Projection Show.#hongkongdisneyland #hkdisneyland #hkdl #disneyparks #香港ディズニーランド #ディズニー pic.twitter.com/LsSQKI35Ae

“We Love Mickey!”
Minnie and her pals will gather everyone to join a surprise party for her favorite guy, Mickey! This new surprise celebration will transform the buildings along Main Street, U.S.A. into a canvas of vibrant, colorful visuals that pay tribute to Mickey’s major milestones.

The artistic experience features Mickey’s memorable classics, his full-color heyday, and a crazy kaleidoscope of Mickey in modern styles. Don’t forget to share your applause for surprise Mickey himself, who will appear in his finest attire. Everyone is invited to this grand event that you’ll want to relive again and again!

Hong Kong Disneyland reopened today after closing its gates on January 7, after the Park announced a 14-day closure to try and halt the pandemic spread in the area. However, after the first week of closure, the Park announced it would extend that closure for another two weeks. That closure extended once again through to April 21. Guests were, as expected, overjoyed to be able to visit Mickey Mouse once again and be able to experience the magic of Hong Kong Disneyland after so long.

Hong Kong Disneyland is an incredibly popular Park that brings in millions of Guests each year. After opening in 2005, Guests quickly came to love the theme Park as much as Walt Disney World Resort or Disneyland Resort! Much like its American counterparts, Hong Kong Disneyland has a ton of Disney Hotels to visit!

Would you like to visit Hong Kong Disneyland this year? Let us know in the comments below!