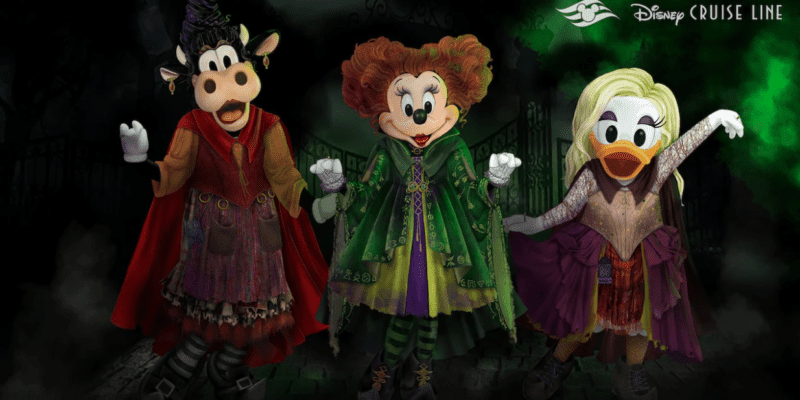 But the Parks aren’t the only place where Halloween events will take place this year as Disney Cruise Line announced Halloween on the High Seas will return this spooky season, with brand-new experiences and costumes!

If you are a fan of Hocus Pocus, you need to book a Disney Cruise Line vacation this Halloween season. Not only will Halloween on the High Seas include a first-of-its-kind character meet and greet inspired by Halloween’s favorite Sanderson Sisters, but Disney Cruise Line Guests will get to see other new experiences debut later this year.

One of the new experiences includes Minnie Mouse, Daisy Duck, and Clarabelle Cow greeting Guests in brand-new Hocus Pocus-inspired costumes, which you can see in the image above.

This September and October, guests will run amuck (amuck! amuck!) on Halloween-themed cruises with special entertainment and activities, including trick-or-treating, spooky parties, elaborate décor and limited-time food and beverage items.

But the fun doesn’t stop there! These voyages will also debut an all-new character meet and greet opportunity exclusively for Disney Cruise Line guests. While all characters on board will adorn Halloween costumes as part of the festivities, Minnie Mouse, Daisy Duck and Clarabelle Cow will debut a never-before-seen look as they dress up as the iconic Halloween sisters, the Sandersons from the movie “Hocus Pocus.”

During its inaugural season of Halloween cruises this fall, the Disney Wish, the newest Disney Cruise Line ship, will also introduce a unique twist on a Halloween on the High Seas hallmark.

The centerpiece of every ship during Halloween sailings is the signature magical Pumpkin Tree towering over the atrium lobby, each with sprouting Jack-O-Lanterns and flickering lights.

Aboard the Disney Wish, guests will witness the debut of an all-new tree in the “Cinderella”-inspired Grand Hall.

Featuring lighter bark, graceful branches and a mystical face, legend has it that this enchanted tree (named Boo) grew beautiful gourds with the help of a wishing star. The best pumpkin of them all was destined to grant a very special wish … and that moment came when a carriage was needed to send a fair maiden to a royal soiree. In a flash of bibbidi-bobbidi-boo, that perfect pumpkin became the coach that carried Cinderella to the prince’s ball!

Halloween on the High Seas sailings will also include Mickey’s Mouse-querade Party, which is a costume party for families of all ages, as well as “villainous takeovers in the adult-exclusive venues; Halloween-themed movies on Funnel Vision; and even a ghostly take on ship announcements”.

Halloween on the High Seas sailings will be offered aboard select sailings in September and October, departing from ports in Miami and Port Canaveral, Florida, San Diego and New York City.

Depending on the ship and port, Halloween on the High Seas sailings will cruise to destinations such as the Bahamas, Caribbean, Bermuda, Canada and Mexico. Additionally, all sailings from Port Canaveral and Miami will include a stop at Castaway Cay, Disney’s private island.

Are you going to sail on a Halloween on the High Seas cruise this year? Let us know in the comments below.