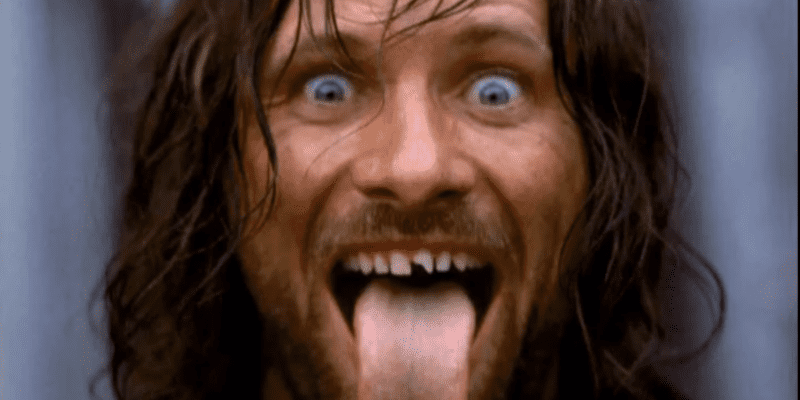 Actor Viggo Mortensen is a household name for his legendary work in Peter Jackson’s The Lord of the Rings trilogy. While every Rings fan knows that Mortensen broke his toe while kicking an Orc helmet, not many know that the Ranger had a close encounter with death while filming.

Filming Middle Earth in Peter Jackson’s native New Zealand presented the cast and crew with many issues. From actor Orlando Bloom (Legolas) to breaking his ribs from falling off a horse to Sean Astin (Samwise Gamgee) slicing his foot open on the shores of the River Anduin in The Lord of the Rings: The Fellowship of the Rings (2001), the Academy Award-winning franchise solidified itself as a cinematic masterpiece.

The most infamous factoid about The Lord of the Rings film series that every Tolkien fan shares while watching The Two Towers (2002) is when Danish actor Viggo Mortensen (Strider/Aragorn) kicks an Orc’s helmet in Rohan when searching for Pippen Took (and Merry Brandybuck the King of Gondor actually broke his toe!

As a result, Mortensen let out his howl of a scream and fell to his knees. Peter Jackson was so impressed with this take that he kept it in the final film, only later realizing on set that Mortensen broke his toe (and later his front tooth!).

Nonetheless, at the end of The Fellowship of the Rings, when Strider faces off Lurtz (Lawrence Makoare), captain of the Ukuk-hai, Mortensen deflected a real dagger when protecting Frodo Baggins (Elijah Wood) and Samwise Gamgee (Sean Astin) from enemy forces.

Due to the heavy cosmetics that actor Lawrence Makoare (Lurtz) was under, his vision was impaired. When throwing a real dagger at Aragorn, the Orc actor was supposed to miss Mortensen by a reasonable distance, but the blade went straight for the actor’s face.

Viggo Mortensen, who was using an actual steel sword, deflected the flying dagger from hitting his face with only a millisecond to spare:

Viggo Mortensen did his own stunts. He also insisted on using only the real steel sword, instead of a significantly lighter aluminum sword, or safer rubber sword, which were manufactured for battle scenes and stunts.

Mortensen encountered death once again in the same sequence when reportedly the shield that pins Strider to an oak tree was stuck, preventing the actor from dodging a blade from Lurtz that was coming straight to his head:

When the shield hits the tree and pins Aragorn to it. He was legitimately stuck and thats actually fear in his eyes because he almost didn’t move in time.

When the shield hits the tree and pins Aragorn to it. He was legitimately stuck and thats actually fear in his eyes because he almost didn't move in time.

Due to Viggo Mortensen performing his stunts, the actor could have faced severe injuries if he could not move in time!

These facts make The Lord of the Rings and author J.R.R. Tolkien’s work all the more legendary, especially when you realize the heart and soul that each cast and crew member put into making these beloved films.

Hopefully, the same goes for Amazon’s upcoming The Lord of the Rings: The Rings of Power!

Let us know your favorite Lord of the Rings fact in the comments below!