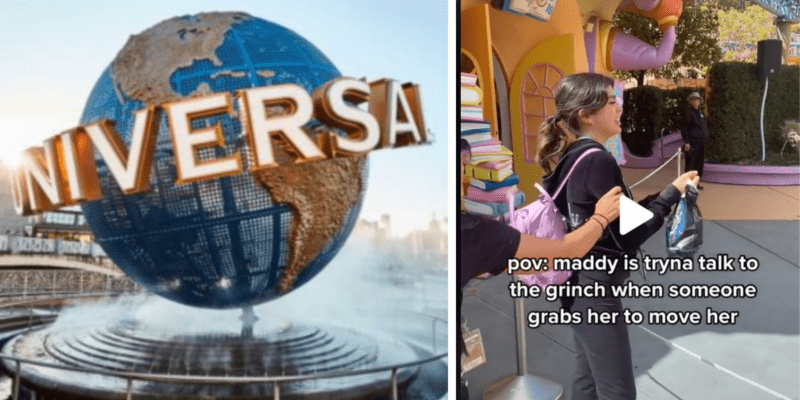 Universal Orlando Resort is known for its thrilling attractions, but that doesn’t mean that the attractions are the only thing to experience.

However, that does not mean that every moment happens just as it should.

A recent incident at Seuss Landing in Universal’s Islands of Adventure showed a Universal Orlando Guest pushing aside a child during a distanced character meet and greet with The Grinch.

TikTok user @seckcmofo shared a video where Maddy, who later revealed herself to be a minor on a trip to Orlando, was interacting with The Grinch. It seems she might have been standing in front of a stroller and a Universal Orlando Guest grabbed her to push her aside.

It’s important to remember to be courteous to everyone when visiting Universal Orlando Resort or Walt Disney World Resort. Placing hands on another Guest is not allowed in any form and can result in expulsion from the Park and even more.

Meet a Crew of Storybook Characters.

See some of your most beloved Dr. Seuss characters in person, including The Cat in the Hat™, Sam I Am, Thing One™ and Thing Two™, and The Grinch™.

If you’re planning a trip to Universal Orlando Resort, there is so much to see and experience at both Universal Studios Florida and Universal’s Islands of Adventure! Harry Potter and the Forbidden Journey, The Amazing Adventures of Spider-Man, Jurassic World Velocicoaster, Skull Island: Reign of Kong, MEN IN BLACK: Alien Attack, The Simpson’s Ride, E.T. Adventure Ride, Despicable Me: Minion Mayhem, Harry Potter and the Escape from Gringotts, Hagrid’s Magical Creature Motorbike Adventure, Race Through New York Starring Jimmy Fallon, Hollywood Rip It Ride It RockIt, and The Incredible Hulk Coaster are just some of the attractions that you’ll fall in love with while visiting Universal Orlando Resort.

In addition, Universal Orlando is in the midst of constructing Epic Universe– Universal’s newest and largest theme park-– that should be completed and ready to open in 2025. Inside the Magic will continue to update you on all Universal Parks news and much more.

What do you think of this incident at Universal Orlando Resort? Let us know in the comments.