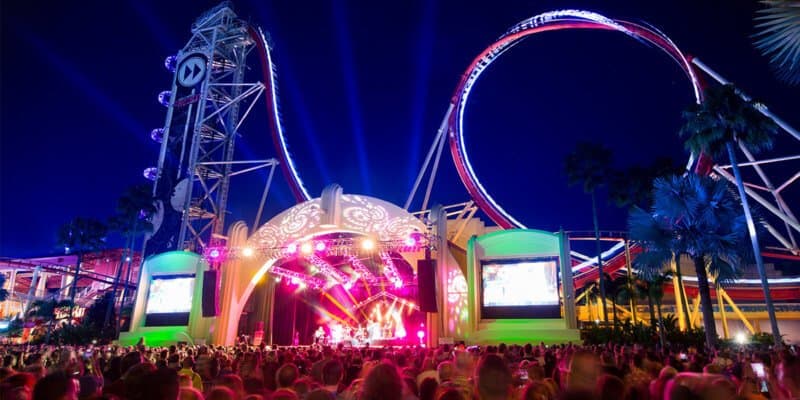 At Universal Orlando Resort, one of the best festivities of the year is currently underway. Mardi Gras is a massive party held at Universal Studios Florida and allows Guests to transport themselves to New Orleans while they drink hurricanes, collect beads, enjoy parades, eat gumbo, and so much more. For the past few years, Mardi Gras has not been in full swing due to the pandemic as the event is very crowd-inducing. Now, as vaccinations have increased and case counts have lowered, Universal has reverted to the classic Mardi Gras style, and Guests cannot get enough.

Starting on February 5 and running until April 24, Universal Orlando is celebrating Mardi Gras with many exciting live concerts, delicious food, parades, and much more. The Universal Tribute Store, which has been transformed into a Halloween Horror Nights, Christmas, and Jurassic World-themed store in the past, is now the Mardi Gras Float Factory.

One of the most memorable aspects of the festival is The Spectacular Parade. Beginning with a classic New Orleans tradition of cops lining the streets. Guests will see cops drive by on motorcycles, lights flashing, before the floats begin, just as they would in New Orleans. This is likely the one time Guests will see cops driving through a theme park with their lights on for no urgent reason!

Alternatively, another one of the best aspects of Mardi Gras is the concert series. Guests are able to see amazing artists perform at Universal for free, as long as they have a valid entry into the Parks. These concerts tend to get pretty crazy, and the popular artists can easily flood the Park to capacity in certain sections. Yesterday, world-wide renowned artist Marshmello performed and Guests came out to party. Quickly, the concert stage filled and the entire viewing area was at capacity. This meant that any Guest who got there later in the day after the capacity signage was displayed would have missed the better viewing of Marshmello’s performance!

Below, we can see how lively and packed the concert was. Amusement Insider (@AmusementInside) posted a video of their experience.

Best Universal concert I’ve been to. Loved it

Best Universal concert I’ve been to. Loved it pic.twitter.com/OQ1r6poTrq

Below, you can see what the signage looks like when a concert hits capacity. Inside Universal (@insideuniversal) posted a photo.

Marshmello shutting it down!

Do you plan on attending Mardi Gras? What concert would you like to see?