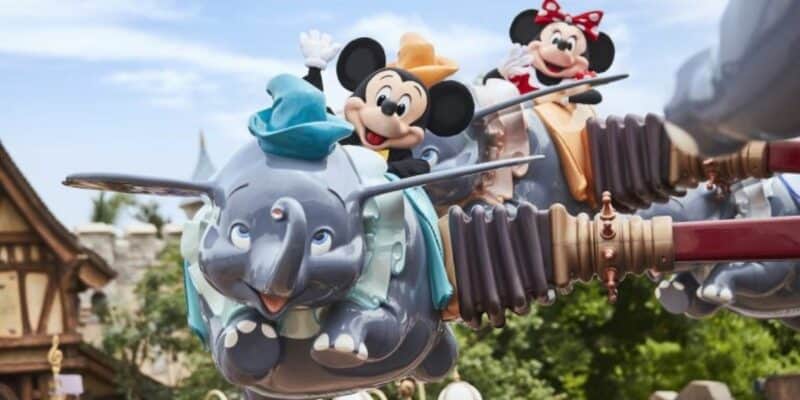 It is always exciting when a Disney Park is able to announce something new is coming, especially if that Disney Park has been shut down for months.

On January 5, we reported that Hong Kong Disneyland would be closing for two weeks beginning on January 7 to try and stop the current COVID-19 spread in the area. The closure was only meant to last for 14 days, but the Park had extended that closure for another two weeks — just one week after the initial closure. Then we announced that the Park was set to open on April 20, 2022, however as we have seen with the previous reopening dates, things can easily be pushed back.

That being said, it seems Disney is looking to keep moving forward despite the ongoing closure of the Park. Disney Magical Kingdom Blog (@DMK_Blog) shared the logo for the new nighttime show coming to Hong Kong Disneyland, Momentous.

It will be launched later this year with the Castle of Magical Dreams as its backdrop, along with a host of other new offerings to enhance guest affinity and boost visitation.

It will be launched later this year with the Castle of Magical Dreams as its backdrop, along with a host of other new offerings to enhance guest affinity and boost visitation. pic.twitter.com/oOKTWiTQ3e

As stated on Disney Wiki, this is what the show is being described as:

Momentous is an upcoming nighttime fireworks and projection mapping show that will debut at Hong Kong Disneyland. Unlike its predecessors Disney in the Stars and We Love Mickey!, this new show includes projection mapping, lasers, and searchlights, as well as pyrotechnics and water fountains. The performances will take place every Friday to Sunday.

The show was originally named as Cherish the Memories in English and was scheduled to open in Fall 2020, as part of Hong Kong Disneyland’s 15th anniversary celebration. However, it was delayed to 2022, since the opening was postponed indefinitely following the closure of the park due to the coronavirus pandemic.

Below is a full list of the attractions and entertainment not available at this time due to the current closure of the Park.

Do you plan to visit Hong Kong Disneyland this year?

Comments Off on Shut Down Disney Park Promotes Nighttime Spectacular