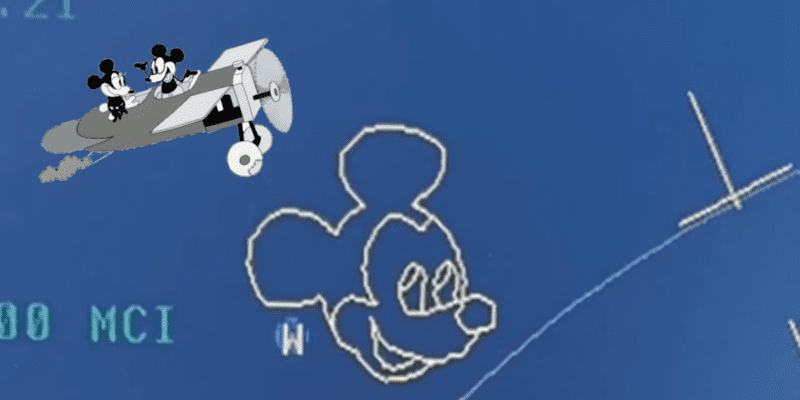 It’s known that Disney Parks and resorts are full of hidden Mickeys, which Guests really enjoy finding and sharing, with some even creating scavenger hunts involving the sneaky mouse and sharing them on social media.

Hidden Mickeys are all around the Walt Disney Company Resorts and come in all sizes. Some of the largest examples are the Mickey solar panel farm near EPCOT and the Mickey face at the courtyard area of Disney’s Hollywood Studios, both at Walt Disney World Resort.

Related: Even the Giraffes at Disney Have Hidden Mickeys!

However, a recent video on TikTok shared an exclusive view of a massive hidden Mickey.

In order to control and coordinate this Temporary Flight Restricted area, Air Traffic Control has marked the entire area over Walt Disney World with the face of Mickey Mouse!

Check out the full video below!

It’s always fun to find out about new hidden Mickeys, though finding this one yourself might require a little more than just a visit to the Parks.

Hidden Mickeys are described as follows:

A Hidden Mickey is a deliberate or accidental placing of a circle with two other circles connected to it on the top in the shape of Mickey Mouse’s head. These have been known to be placed in Disney-themed movies, Disney rides, and other such media. Some have been known to occur by happenstance when something is in the right spot at the right time, such as lamppost or railing shadows.

A “Hidden Mickey” can refer to any Disney-related object hidden in one of the various Disney Parks for visitors to find. Goofy, Donald Duck, and Tinker Bell have all been found as hidden characters in Disney Parks.

Since there are so many of them and they are all over Disney property and media, fans can have a great time finding them and sharing their experience.

Which is your favorite hidden Mickey? Let us know in the comments below!