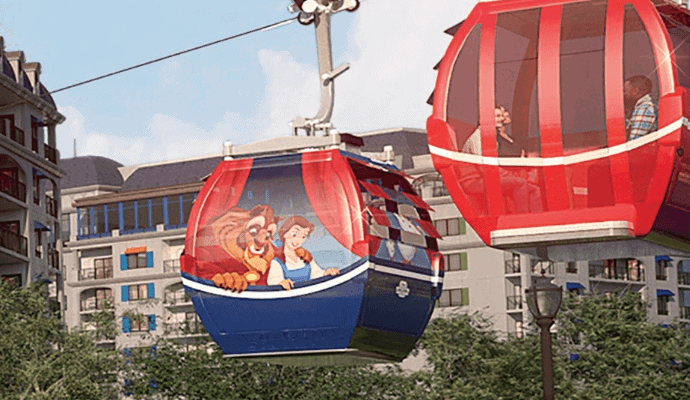 Walt Disney World Resort is home to many iconic and magical experiences.

From iconic attractions like Haunted Mansion, Jungle Cruise, Pirates of the Caribbean, Space Mountain, and Splash Mountain to new thrills like Star Wars: Galaxy’s Edge, Mickey & Minnie’s Runaway Railway, Remy’s Ratatouille Adventure, to epic nighttime spectaculars, parades, and so much more, there is something for everyone at Walt Disney World Resort.

Of course, if you’re staying on a Disney property, it means you’re also given the perk of complimentary transportation to the Disney Parks and Disney Springs. While most Resorts will use buses as the primary transportation, there are four Resorts that use the newly-constructed Disney Skyliner to get to and from Disney’s Hollywood Studios and EPCOT.

Of course, things haven’t always gone as planned since the Disney Skyliner opened. The transportation system has undergone closure periods due to needed maintenance and weather plays a major role in if it is able to run or not. Many Disney Guests have also reported being “broken down” on the Skyliner, suspended in the air as the transportation halted.

It seems one Disney Park Guest may have finally found the culprit for these stoppages, though.

Reddit User U/rexraidr recently posted a photo of the Disney Skyliner experiencing a stoppage and none other than Stitch was seen on the side of the transportation.

Of course, we all know how Experiment 626 can get into trouble and he can be very destructive from time to time!

In the same Reddit thread, a Disney Guest shared an experience where they stopped just past the gate at the edge of the Disney Skyliner station. After speaking with an engineer who manually shut their door, they learned that there is a sensor at the end of the station that prevents cabins from taking off if the doors aren’t locked.

“We were about to take off from the Riviera station but stopped just past the gate at the edge of the station,” User U/WhatWouldLoisLaneDo said. “A Doppelmayr engineer came up to our car, opened the door with his hands and shouted back “Found the problem one!” He then gets a hooked pole, shuts the door manually, and pulled something on the roof of the cabin with the pole. The doors had shut but the locking mechanism failed to engage. There is a sensor at the end of the station that prevents the cabin from taking off if the doors aren’t locked. Makes perfect sense and was cool to see.”

More On The Disney Skyliner

Glide across the sky and add an extra dash of pixie dust to your day.  This grand, state-of-the-art gondola system conveniently connects Disney’s Hollywood Studios and the International Gateway at Epcot to the following Disney Resort hotels:

Guests will enjoy a fun way to travel to Epcot and Disney’s Hollywood Studios.

Do you enjoy taking the Disney Skyliner? Let us know in the comments!