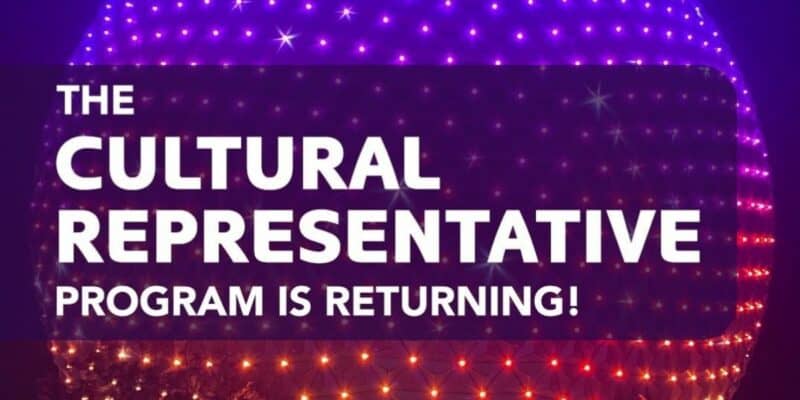 Frequenters of EPCOT and the World Showcase know that International Cast Members enrich the experience of the theme park. The knowledge, culture, and enthusiasm the cultural representatives bring have been sorely missed as the pandemic canceled international programs . While we have heard murmurings of the programs returning, we’re happy to report that the Disney International Programs are BACK! Disney announced today that the cultural representatives will be returning in phases to Walt Disney World Resort!

The official Disney Programs Instagram account posted around noon on Friday, March 25, 2022, that the International program , which is famous for employing cultural representatives at EPCOT, will be returning in phases for select countries. As the global pandemic arrived in 2020, Disney Parks programs were cut short, eliminated completely, or canceled. This will allow a Disney program participant that initially held an invitation to reapply before others are considered. The official account for the Disney College Program, Professional Internships, and Culinary Program stated,

We have an exciting announcement to share! 📢 The Disney Cultural Representative Program is returning! 🌎

We’re looking forward to welcoming back participants from around the world and sharing more updates about Disney International Programs in the future!

Further details were also shared by Disneyphile Scott Gustin. He shared that the Disney Cultural Representative program will return to EPCOT shortly, as well as more information on the pavilions included. His initial tweet read,

NEW: The Disney Cultural Representative program will return in phases and begin welcoming the first new participants in August.

NEW: The Disney Cultural Representative program will return in phases and begin welcoming the first new participants in August. pic.twitter.com/HfXEx5yE6K

Shortly after that, Gustin extended his breaking news with more details. Disney will reach out to select countries whose earlier programs were canceled in 2020 as the global pandemic arrived. Also, those representatives who already held an employment offer but had not yet arrived in Florida will be gleaning the first opportunity to reapply for the Disney Cultural Representative program. This early cultural representation invitation recruitment will start for the Germany, Norway, Italy, France, UK, and Canada pavilions in World Showcase. Scott’s exact tweets read as a quote from Disney followed by clarification for these additional countries.

“We are reaching out to participants from select countries whose program was shortened, cancelled or waitlisted in 2020, as well as those who had an offer and had not yet arrived, and offering them the first opportunity to reapply. We will then invite others to apply soon.”

According to Disney, initial recruitment will start in Germany, Norway, Italy, France, UK, and Canada for World Showcase at EPCOT.

According to Disney, initial recruitment will start in Germany, Norway, Italy, France, UK, and Canada for World Showcase at EPCOT.

Are you excited about the return of the Disney cultural representatives? Leave us a comment below!

Comments Off on Disney Cultural Representative Program Returns to EPCOT This Summer!