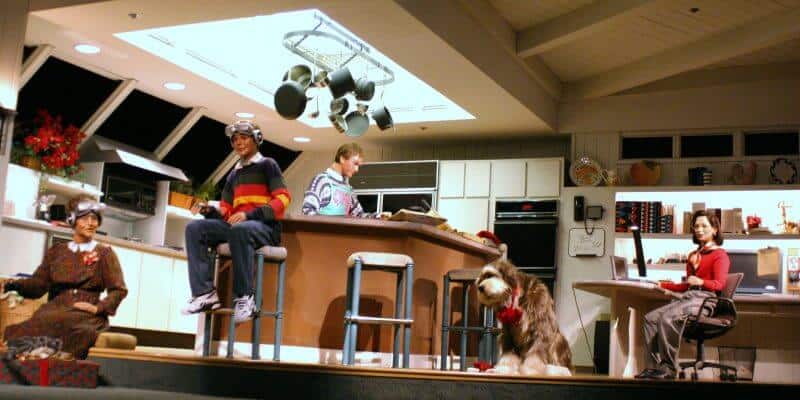 When Guests see something crazy happen while riding a Walt Disney World attraction, at times, they may not be able to believe their eyes.

In the past, we have discussed some pretty unique experiences where Guests saw Guests jumping out of their ride vehicle while riding Living with the Land to steal a cucumber, or Guests popping into the waters of Splash Mountain to retrieve a stolen hat. We often tend to see Guests trespass into areas they should stray away from, but what happens when it is an animal?

The cats of Disneyland are a very popular feature of the Park for locals, as they often pop up around the Park. Guests have gone so far as to name the cats that help keep the Park clear of mice and rats. At Walt Disney World, there are also some cats lurking around, however, Guests tend to see them far less frequently, so it may be a shock when one of them pops up.

In Tomorrowland, Guests have the chance to see a creation that Walt Disney started for the Worlds Fair in 1964. The Carousel of Progress shows the Progress family navigating their way through life as technology continues to change around them. With the Sherman Brothers song “There’s A Great Big Beautiful Tomorrow” implanting itself in every Guests’ head, the ride is a true Magic Kingdom classic.

One Disney Guest noted that they appeared to have seen a cat run through the final scene in Carousel of Progress!

Recently, we saw a Guest post to Reddit about their past Disney World vacation, and in a section of their trip report, they noticed a strange sighting on Carousel of Progress.

My brother and I did Carousel of Progress on Tuesday afternoon. All went as expected until the very end. Pasting a comment I made a couple of days ago for easier writing:

“Ok so it was during the very last scene when you rotate back to the curtains and the logo. This orange cat runs into the curtains on the right side of the stage. My brother saw it and there was a service dog in the front who reacted to it so I don’t THINK I hallucinated…

I googled and apparently there’s a thing about a cat hidden in each scene of the show? So it might actually have been intentional. But I couldn’t find a reference to this particular cat online and the movement was ahh… agile for an animatronic. Kinda rare for them to run? And there was no track…

So ahh… yeah. Easily the strangest moment I’ve had at Disney World lol. I feel like I should have told a cast member just in case, but at the time we were a bit too confused. Anyone else ever see this? This was my second time doing CoP and I have no memory of this happening last time.

The Guest said that they were unsure if the cat was an animatronic running across the stage, which we can assure that it was definitely not. The attraction may have an animatronic dog named Rover, but no cats can be found in the show as animatronics. Although the Guest feels unsure if they actually saw the cat due to the shocking nature of the scenario, since there are cats at Disney World, the possibility of one of them getting into the show building and making their big debut on stage is not too out of the realm of possibilities.

One Redditor even commented that it was likely a cat at Disney World, and explained that they have even heard a story of a cat “unloading” itself while on the stage! So, it seems that the Disney cats have taken a fond liking to Carousel of Progress!

Disney describes Carousel of Progress as:

Have you ever seen a cat running rogue at Disney World?