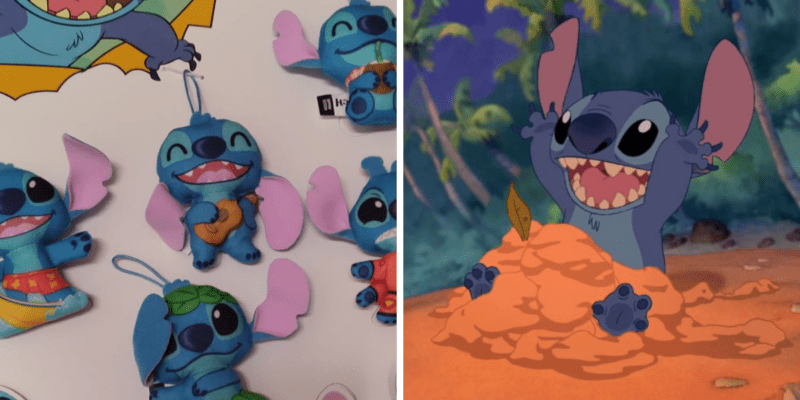 ‘Ohana means family, and that means no one gets left behind or forgotten! We saw this image circulating around and knew that we could never forget Stitch! The mischievous alien is getting his own McDonald’s Happy Meal toys to celebrate the 20th anniversary of Lilo and Stitch (2002) film debut.

Let’s see when we can expect the Stitch happy meals toys to hit fast food stores!

Mischief, love, and lots of bravery are coming to a Happy Meal near you! In celebration of the 20th anniversary of the Disney animation film, McDonald’s will be including small plush toys of Stitch in kid’s meals. The set of 8 happy meal toys will inevitably draw collectors of Stitch, but also Happy Meal toys to the fast-food supplier.

McDonald’s employee Savannah B. posted on Facebook the image she sourced with a bit of detail about the upcoming campaign. Working in Hollywood, Florida, she’s excited about the Stitch Happy Meal Toy debut and wanted to know if anyone else had seen the campaign, or started to hand out the items. Her poster image shows the 8 toys in 2d form, but also shares that the kid’s meal apple packs and milk will feature Stitch imagery and labels.

This lines up with the previous releases of Magic Kingdom and Walt Disney World 50th anniversary toys as well as the Fab Five apple and milk imagery.

It’s true! There has been a leaked image of a promotional and informational poster from McDonald’s showing the set of toys that will be available. It also clearly shows the release dates to be February 8, 2022, to March 7, 2022, giving Stitch about a month in the spotlight.

In the public Facebook group Stitch Fans Worldwide, Facebook user Anthony P. shared more than the information memo. His image shows a display for McDonald’s with some Stitch McDonald’s toys lot already hanging. We can see that the toys have a top loop and are thin plush objects. All of Stitch’s features and outfits are printed onto the fabric and die cut to create his form. There is a Surfer Stitch, Experiment Stitch (orange outfit), Cool Stitch (sunglasses), Sippin’ Stitch (holding the tiki mug), Ukulele Stitch, Hula Stitch, Sittin’ Stitch, and Mischief Stitch.

Stitch lover Suzy holds the world record for the largest Lilo and Stitch merchandise collection, and after seeing that McDonald’s is getting Stitch toys in the United States, reached out to the McDonald’s Twitter handle to see if they would also come to the United Kingdom. We’re sure she’ll manage to collect them all! Her tweet reads,

@McDonaldsUK, any chance they the U.K. will be getting theses? They are coming to the @McDonalds in the USA. I hold the world record for the largest collection of Lilo and Stitch memorabilia so I really need all of it in my collection!!

@McDonaldsUK any chance they the U.K. will be getting theses? They are coming to the @McDonalds in the USA.
I hold the world record for the largest collection of Lilo and Stitch memorabilia so I really need all of it in my collection!! pic.twitter.com/Hn7oEnu7eU

The Twitter account that posts “No Context Lilo and Stitch” content also heard about the upcoming Stitch Happy Meal toys, and posted on their feed. After a response about a source, they shared a YouTube video by Happy Meal toy enthusiasts sharing all the Happy Meal toy rumors.

Omg that would be amazing!! Where did you hear this at?

These toys will obviously be popular with both Disney fans and McDonald’s Happy Meal toy collectors, and we’re excited to see Stitch getting some face time! We’re also ready for the live-action version of Lilo and Stitch (date unknown) on Disney+.

Will you be collecting these Stitch Happy Meal toys? Leave us a comment below!