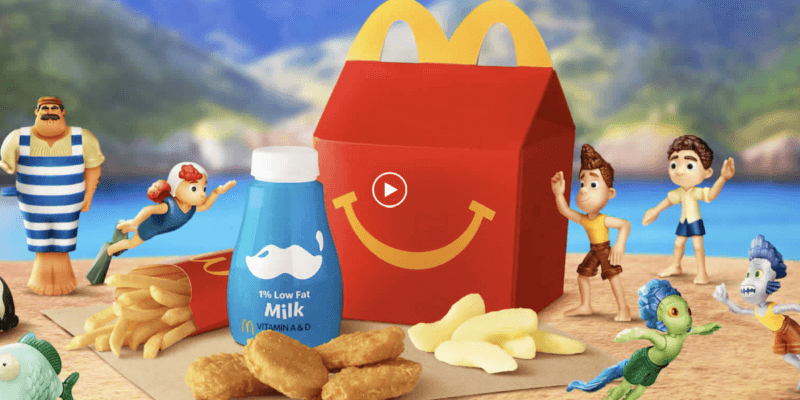 McDonald’s often has collaborations with Disney for their Happy Meal toys. Oftentimes, these collections are very successful and have many adults searching for specific toys to complete their sets.

Certain collections can even be found on eBay for quite costly amounts compared to what they are worth when purchasing them at McDonald’s. The most recent collection that had Disney Parks fans lining up in drive-thru’s across the country was the Disney World attractions collections.

Fans collected different parts of a train that would represent iconic attractions found at Disney World, each with a different Disney character riding the attraction! Now, it seems Pixar’s latest film Luca has found a Happy Meal home.

As you can see in the photo above, the McDonald’s website is showcasing the eight toy Luca collection that can be acquired by purchasing a Happy Meal (or, theoretically, eight Happy Meals).

The McDonald’s website also has even more Luca fun to offer, with coloring pages of characters from the film available to print.

YouTuber Fast Food Toys also did an in-depth review of each figurine. If you are interested in seeing the Luca Happy Meal toys in a more detailed light, take a look at the video below.

Disney fans will be able to watch Luca for free on Disney+ as of June 18. The film was originally slated to be a theatrical release, but due to the ongoing COVID-19 pandemic, the release trajectory of some films was altered. This is also something we saw at the end of 2020 as Pixar’s Soul was released to Disney+ for free, as well.

Do you plan on visiting McDonald’s to get your hands on one of the new Luca toys? What collection would you like to see next?