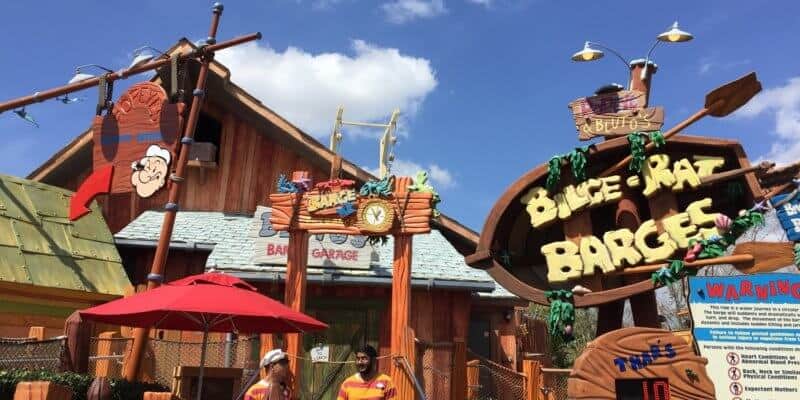 If you were hoping to get soaked at Universal Orlando Resort in the near future, you might be a little disappointed.

Popeye & Bluto’s Bilge-Rat Barges is now undergoing scheduled maintenance and will be closed for the majority of next month, scheduled to reopen on March 19 but that is subject to change.

Both Dudley Do-Right’s Ripsaw Falls and Jurassic Park River Adventure were closed right at three weeks and that’s about what we can expect with Popeye & Bluto’s Bilge-Rat Barges, as well, but the good news is that the attraction should be open again just in time for spring break crowds to make their way to the Universal Parks.

There is plenty to enjoy at Universal Orlando Resort. Hollywood Rip Ride Rockit, MEN IN BLACK Alien Attack, Transformers: The Ride, Despicable Me: Minion Mayhem, E.T. Adventure Ride, and more can all be found at Universal Studios Florida. Islands of Adventure has some fantastic attractions, as well, like The Incredible Hulk Coaster, Doctor Doom’s Fearfall, The Amazing Adventures of Spider-Man, Jurassic Park River Adventure, the all-new Jurassic World Velocicoaster, Skull Island: Reign of Kong and more!

And, who could forget about the magical Wizarding World of Harry Potter located at both Universal Parks? Visit Diagon Alley in the Wizarding World of Harry Potter, where you can venture into Gringotts at Universal Studios Florida, or go on a ride of a lifetime at Harry Potter and the Forbidden Journey and Hagrid’s Magical Creatures Motorbike Adventure at Hogsmeade in Islands of Adventure. Volcano Bay is also open for those who want to get their splash on, and at the moment, Epic Universe is under construction with a potential 2025 opening date.

Are you going to miss Popeye & Bluto’s Bilge-Rat Barges during your trip?