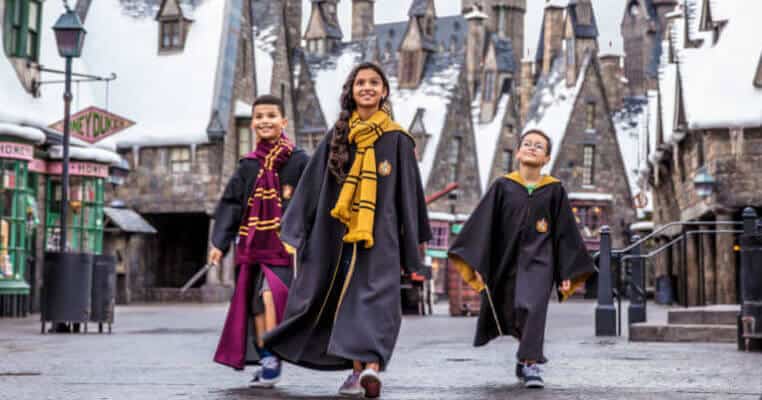 Universal Orlando Resort is known for its thrilling attractions.

From amazing rides like the Jurassic World Velocicoaster, The Amazing Adventures of Spider-Man, The Incredible Hulk Coaster, The Simpson’s Ride, Hollywood Rip It, Ride It, RockIt, and everything in between, there is plenty for Guests visiting Universal Studios Florida and Universal’s Islands of Adventure to experience.

However, the attraction that draws the most Guests to the Universal Parks without question is The Wizarding World of Harry Potter.

Hogsmeade in Islands of Adventure and Diagon Alley and London Crossing in Universal Studios Florida are state-of-the-art and immersive lands that take Guests on experiences unlike anything else.

While rides like Harry Potter and the Forbidden Journey, Harry Potter and the Escape from Gringotts, Hagrid’s Magical Creatures Motorbike Adventure, and The Flight of the Hippogriff are must-dos, there is plenty more to experience in the Wizarding World than just rides.

One of the most prominent attractions in the Wizarding World is getting your own wand.

Over the last few years, Universal Orlando has had two sets of wands for Guests to purchase: interactive and non-interactive.

The interactive wands allow Guests to cast spells to create magical experiences throughout both Hogsmeade and Diagon Alley. The non-interactive wands are based on characters- like Professor Dumbledore, Harry Potter, Hermione Granger, and Lord Voldermort– but do not perform spells.

It seems, however, that Universal Orlando may be beginning to phase out its non-interactive wands.

Related: Epic Universe Could Include Another Wizarding World of ‘Harry Potter’

Universal Orlando has stopped with its selling of many non-interactive wands online and many Guests, including Reddit User @LilScarface609, have noticed that they are harder to find in the Universal Parks.

I’ve noticed around the parks and even online, that there’s barely any non-interactive wands anymore, which is a shame, because I personally like them a lot more than the interactive ones. They’re heavier and just feel a lot more premium. The only ones they have available are Harry’s, Dumbledore’s, Hermiones, and Voldemort’s.

I’ve also noticed that by signing up for a Universal Merchandise Shopping Card, you get a free non-interactive wand.

Is universal phasing them out or something? Did they change it so they’re only available to people who get the Universal Card?

In the same thread, user @peachy_clean shared that the gift card deal was a way to help phase out the product that is remaining.

Yeah we’re getting rid of them that’s why the gift card deal exists to get rid of what we have left.

It should be noted that Universal Orlando Resort has not confirmed this and that non-interactive wands can still be found currently. However, it is something to keep an eye on as the year progresses.

Cast Spells Throughout Both Magical Lands.

With a gentle flick of the wrist and the right incantation, Interactive Wands allow you to cast spells to create amazing magical experiences throughout Hogsmeade™ and Diagon Alley™. Wave your wand, recite the proper spell, and watch as the magic unfolds. Remember to speak slowly—with the proper practice you are sure to see extraordinary results.

What do you think of Universal Orlando potentially phasing out the non-interactive wands?