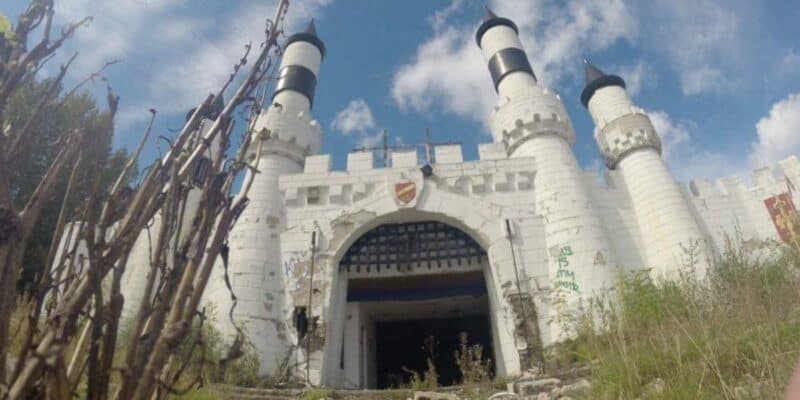 Imagine stumbling upon an abandoned theme park when you start to see zombies strolling through the grounds. Sounds like you are headed straight into an episode of The Walking Dead right? Even Halloween Horror Nights is not that scary, because at least Guests know that once they enter the archway of Universal Studios Florida, they are headed into a pre-planned nightmare that is safe for Guests. You expect to be scared.

Well, influencer and reality-star couple Molly-Mae and Tommy Fury (Love Island) experienced the thrill of a lifetime when they entered Camelot Theme Park. It is noted that Camelot Theme Park was a resort and theme park located in the English county of Lancashire. The park’s theme was the well-known legend of Camelot, and the park decor incorporated pseudo-medieval elements. Opening in 1983, the Park shut down in 2012. It seems the closure of the castle park was due to poor weather and low attendance.

The Sun reported on the event with stories from Molly-Mae and Tommy’s Instagram, in which they were detailing their experience. In a story, Molly said, “Tommy and I took a drive the other week to find this abandoned theme park (yes, that’s what get up to when we get time together). We drove an hour and literally couldn’t find anything or see a thing… This week coincidentally they opened up a zombie drive-in cinema at the abandoned theme park we tried to find, so we finally got a look around. Tommy used to come here as a kid!”

What are the odds that an abandoned theme park that is being dismantled had a pop-up zombie drive-in open when you went to visit? Well, surely it was quite the experience for the two to stumble upon some zombies while horror flick, The Ring (2002), played on a giant screen. The drive-in will continue to run at the abandoned theme park through to March. You can even drive through a parade of zombies during your visit!

Take a look at the abandoned park in the video below!

Nara Dreamland is another abandoned theme park that has had its fair share of urban explorers come to visit. Luckily, they never had to deal with unexpected zombies, but the broken down and rusted-looking attractions, mixed with the vandalized attractions definitely keeps the eerie vibe alive. The theme park was actually one that was modeled after Disneyland, and one that Walt Disney considered purchasing as an expansion before Disney World construction began. Read more on that here.

Have you ever heard of Camelot theme park? Let us know in the comments below!