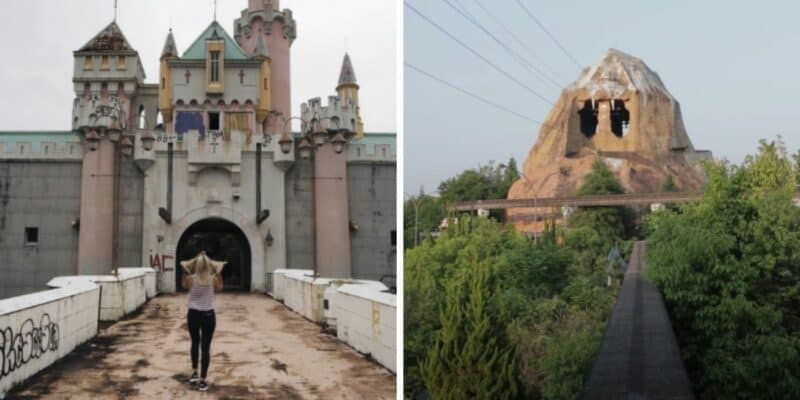 With the Disney Parks always looking so perfect and pristine, it is always shocking to see something abandoned.

Contrary to what you may think, there are actually a lot of areas and attractions at Disney Parks that remained abandoned for years. On top of that, there is one theme Park that was nearly brought into the Disney Parks category that ended up falling through the cracks and eventually decaying into an abandoned mess.

Although many may associate Japanese Disney Parks with Tokyo Disneyland and Tokyo DisneySea, another theme Park was meant to become a Disney Park and when then left to rot. As we have reported in the past:

The Park was not Disney affiliated but had striking Disneyland similarities, such as the castle as the “weenie,” which looked very similar to Sleeping Beauty Castle. Nara Dreamland would also have its own version of a Main Street, U.S.A., a Mad Tea Party-Esque ride, a Jungle Cruise-style boat ride, and a Matterhorn-like attraction.

Nara Dreamland was operational for 45 years but took a substantial hit once Tokyo Disneyland was built. Attendance would drop heavily, and then in 2006, the theme Park closed its doors for good. The Park was be left to decay for ten years until 2016 when demolition would finally begin. Nara Dreamland’s abandoned state may be history now, but luckily, there is video footage that we can use to revisit the abandoned theme Park once again.

YouTubers, The Proper People, posted an abandoned exploration video of Nara Dreamland. The video shows that many of the attractions are still in place, and the once-happy Park looks like it is ready to have a horror film shot within it. The video uses a lot of flashlights in order to make their surroundings visible, which only adds to the eerie feeling of the Park.

If you want to check it out, take a look at the video below.

What do you think of Nara Dreamland? Let us know in the comments below.