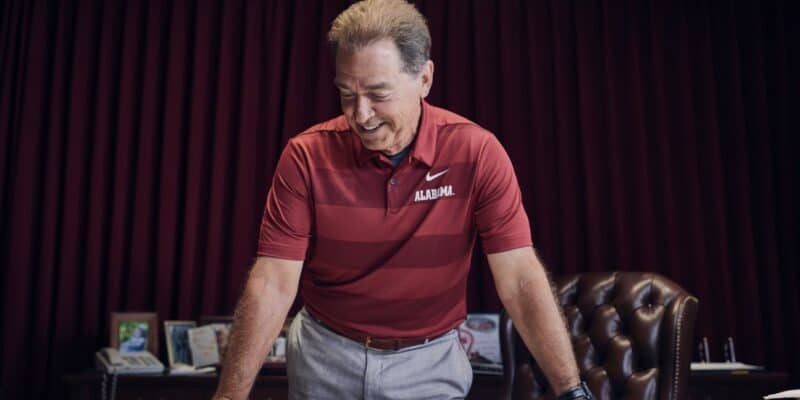 70-year-old Saban left Louisiana State University in 2004 to take an NFL head coaching position with the Miami Dolphins. After proclaiming it a “huge mistake to leave college football,” he became the University of Alabama’s head coach in 2007. Since then, Saban and the Tide have won six National Championships in the past 15 years. In fact, since the College Football Playoff (CFP) started in 2014, Alabama has been left out only once, in 2019.

This year, however, the team lost a heartbreaker to the University of Georgia at Lucas Oil Stadium in Indianapolis. On the heels of the loss to UGA on January 10, 2022 — to former assistant, ex-Alabama Defensive Coordinator Kirby Smart, no less — Saban’s future has been top of mind for the Crimson Tide faithful.

The former Cleveland Browns coach has previously shared that he doesn’t plan to retire “anytime soon” and recently addressed where he is now in regard to retirement. He told the Alabama Football Coaches Association:

“Everybody asks me when I wanna retire. Retire from what? I’m gonna jump into an empty abyss, aight, of what am I going to do? Because the very challenges that I talk about and the things in our profession that concern me – for you and for me both, in your game and our game – that’s what keeps me going. That’s why I get up every day. That’s why I can’t sleep at night sometimes.”

“So why would you quit doing that? I haven’t figured that one out yet.”

The two words he used to describe no longer coaching were “empty abyss,” so it doesn’t sound like the septuagenarian has plans to leave the sidelines anytime soon.

Following the Tide’s missed attempt at back-to-back National Championships — they handily beat the Ohio State Buckeyes in 2021 after a loss to the Trevor Lawrence-led Clemson Tigers  during their last Championship appearance in 2019 — ESPN reported on Saban’s response to losing star wideout Jameson Williams early in the game:

“This guy contributed tremendously to our team all year,” Alabama coach Nick Saban said of Williams. “He has great speed. He’s a vertical threat. I think our offensive coaches did a great job of utilizing his talent this year. He’s been very productive. Any time you lose players like this, it has an impact on your team.

“It gives other players opportunities, and I’m not disappointed in how they responded to that, but there’s no question that you win with great players. You win with great people. And he’s been a great person and a great player on our team all year long. So when you take him out of the lineup, it has to have some impact.”

The Crimson Tide will kickoff the 2022 season on September 3, 2022 against Utah State at Bryant-Denney Stadium. Their Southeastern Conference schedule begins on September 24 against Vanderbilt.

How long do you think Nick Saban will coach?