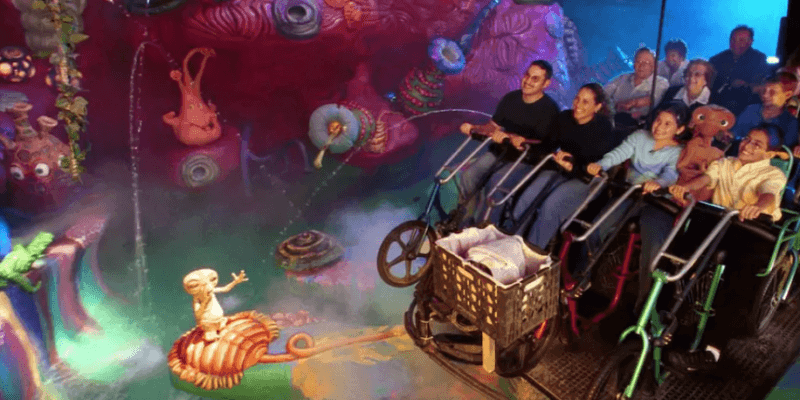 Universal Orlando Resort is known for its many attractions, including the Wizarding World of Harry Potter, but perhaps the most iconic ride in the Universal Parks can be found outside of Hogsmeade and Diagon Alley.

There are only two attractions remaining in Universal Studios Florida that were a part of the Park’s opening in 1990: E.T. Adventure Ride and The Monster Horror Makeup Show. Everything else has been updated to a new attraction and only remnants of their existence remain in honorary decorations and occasional merchandise in the gift shops.

For years, Universal Orlando fans have been worried that E.T. Adventure Ride might be the next to go. Just recently, a thread on Reddit discussed the worries that the ride could close at the Universal Park and, today, we have more news to report about the ride.

Theme Park Reporter Alicia Stella recently posted photos of the line queue for the preshow of E.T. Adventure Ride and we can see that there have been black tarps placed in the two rooms, meaning that Guests who typically had three lanes to pick up their Interplanetary Passports are now all filing through one lane while the others are closed.

ET preshow only loading one third of space, while tarps block off other sections of preshow and names rooms.

ET preshow only loading one third of space, while tarps block off other sections of preshow and names rooms. pic.twitter.com/qvxyn4RYnL

While Universal has not confirmed anything, it seems that these areas are undergoing refurbishments and are going to be updated seemingly by section. This will allow the ride to remain open even while updates are happening in the line queues, but nothing major is expected in terms of construction.

As far as the fears of a permanent closure, while the black curtains may throw off Universal Orlando fans for a second, there isn’t much reason to worry about a closure. Universal and Steven Spielberg have an agreement in place that keeps him as a consultant as long as E.T. Adventure is in Universal Studios Florida. If the ride were to shut down, that would mean losing Steven Spielberg and that doesn’t seem like something the company is interested in right now.

Fly With E.T. To His Home Planet

Do you love E.T. Adventure Ride at Universal Studios Florida?