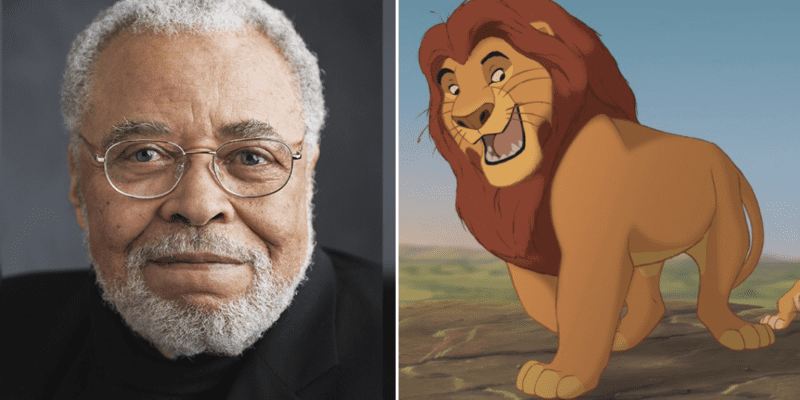 When a Disney legend passes, it is often heart-breaking, and many of us fans discover the tragedy through social media. On Twitter, we often see the actor/creator/performer/etc in a photo, next to an iconic role or work they helped to create. Just seeing the photo laid out in such a way often leaves fans with a pit in their stomach. Recently, a Tweet put out by D23 sent fans nearly panicking after seeing iconic Disney legend James Earl Jones on display.

Thankfully, this tweet was not meant to appear as morbid as many fans took it, and James Earl Jones is still well and alive, at 91 years young. James Earl Jones is known heavily for his work with multiple Disney franchises. Arguably, most iconically he provided the voice of Mufasa in The Lion King and its 1998 sequel The Lion King II: Simba’s Pride. He reprised the role in the 2019 live-action version directed by Jon Favreau and the pilot film for The Lion Guard. On top of that, he is very well known for his voice of Darth Vader in the Star Wars saga, which went on to be owned by Disney. He reprised his role in Star Wars Rebels, Rogue One, and The Rise of Skywalker.

Over the past 40-some years, Jones has provided the voice of Darth Vader for a wide range of Star Wars projects. Wookieepedia provides a full list:

He even reprised his role as Darth Vader in the Star Tours: The Adventures Continue attraction at Disneyland and Disney’s Hollywood Studios — and voiced Mara in Indiana Jones Adventure: Temple of the Forbidden Eye at Disneyland; and that is just scratching the surface. D23 (@DisneyD23) recently released a profile on the actor for Black History Month, and on Twitter, some fans had to take a second to breathe after seeing it at first glance.

Everyone’s immediate reaction because of how poorly Disney worded this:

Everyone's immediate reaction because of how poorly Disney worded this: pic.twitter.com/gzfiXCRunS

Blame it on Disney for scaring us.
All these greats dying at what seems an insane rate frightens us.

Blame it on Disney for scaring us.
All these greats dying at what seems an insane rate frightens us.

Y’all REALLY need to start your posts differently when talking about James Earl Jones. I almost had a damn heart attack

Y'all REALLY need to start your posts differently when talking about James Earl Jones. I almost had a damn heart attack

Tina Diaz (@TinaDz88) also had a brief moment of panic.

Booooooooooooyyyyyy why. Why you trying to scare the life outta me? Love JEJ I all his many roles. But many ar first glance o thought this was THE news about him. No mas my heart

Booooooooooooyyyyyy why. Why you trying to scare the life outta me? Love JEJ I all his many roles. But many ar first glance o thought this was THE news about him. No mas my heart ❤️.

Over 1,000 fans continued to comment or re-Tweet the post explaining that Disney sent them into a moment of panic, when really the intention was not that at all!

With nearly 200 credits in film and television, and countless more on the Broadway stage, it’s hard to imagine a more recognizable voice than the rich and commanding basso profundo tones of James Earl Jones.

In 1977, as the voice of Darth Vader in Star Wars: A New Hope, Jones helped create perhaps the most indelible screen villain in decades, a role which he has continued to portray in subsequent films in the Star Wars franchise, including Star Wars: The Empire Strikes Back (1980), Star Wars: Return of the Jedi (1983), Rogue One: A Star Wars Story (2016), and the Disney XD TV series Star Wars Rebels (2014–2018).

In stark contrast to his vocalization as Darth Vader, he also voiced the majestic Mufasa in Disney’s The Lion King (1994). “Doing a voice for animation is acting in its purest form. It’s a bit like the ancient Greek form where the actors would wear masks. In our case, the masks are the animators’ drawings and we just simply supply all the behaviors, emotions, and feelings behind that mask,” the actor recalled. His Mufasa would be heard again in The Lion King II: Simba’s Pride (1998) and The Lion Guard: Return of the Roar (2015).

Other Disney credits include Three Fugitives (1989), ABC’s Recess (1998), as the voice of Santa Claus, True Identity (1991), Jefferson in Paris (1995), segment host for Fantasia/2000 (2000), and narrator for the Disneynature film Earth (2009). His voice has been heard in Disney Parks around the globe, including recurring vocal performances as the menacing Darth Vader for Star Tours: The Adventures Continue and as a past celebrity narrator for the Candlelight Ceremony and Processional at Disneyland Park.

In 2019, Jones reprised his role as the voice of Mufasa in The Walt Disney Studios’ photo-realistic re-imagining of The Lion King, and proudly was inducted as a Disney Legend that same year.

Lucky for all of us, there is no need for concern regarding James Earl Jones!

Did you see this Tweet and panic as well?