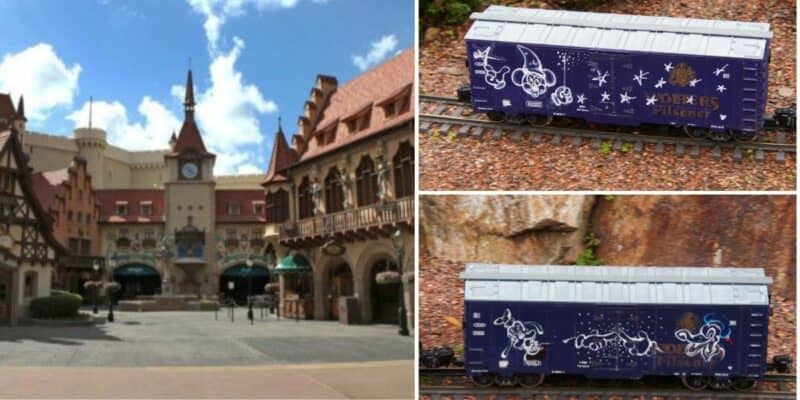 It looks like Disney got a little wild on one of their display trains in EPCOT, and we actually think that they should take these creative liberties even more often!

When Guests enter EPCOT, after seeing the illustrious Spaceship Earth, they are currently met with a plethora of construction walls. Although there are still attractions like Test Track and Mission Space around, as well as fantastic dining options like Space 220, Garden Grill, and more — World Showcase seems to be the most “normal” feeling aspect about the Park without all of the chaotic construction going on. Because of this, we have seen the World Showcase quite busy with Guests wanting to experience the delicious margaritas in Mexico, eat all the pizza of Italy, grab a Guinness in the U.K., check out Paris in France, and more.

In Germany, Guests are able to see and eat a lot. From the Werthers caramel popcorn that literally hypnotizes Guests with its alluring smell, to the amazing eats at Biergarten, it is easy to want to buy everything in the pavilion. Also, with Snow White meeting there, you can get your chance to meet with Disney’s first princess! One of the most fascinating things about the pavilion is the fact that it does have a nod to Walt. As we know, Walt loved trains, and there is a mini train set available for Guests to look at, located in a miniature town.

Now, it seems that Disney added some of their own artwork to one of the vehicles on the trains. One thing that we often see on trains is vandalism. Considering trains often sit unattended for hours, many graffiti artists often tag certain sections of trains. Now, Disney decided to add their own tag but it looks a lot more magical than one may have thought!

Bioreconstruct (@bioreconstruct) posted a few photos to Twitter to show off the Sorcerer Mickey graffiti as well as Pluto and Donald. Online, it seems there was some debate as to who did the tag, but from the looks of it, it seems pretty clear that it was done by Disney! One thing we are not sure, however, is if this is solely for the 50th anniversary, or for the ongoing Festival of the Arts, which will come to an end tomorrow. If the artwork on the train lasts past Monday, then it is safe to say that this vandalization will be around for a while.

What do you think of this added artwork to the Germany train set at EPCOT? Let us know in the comments below!