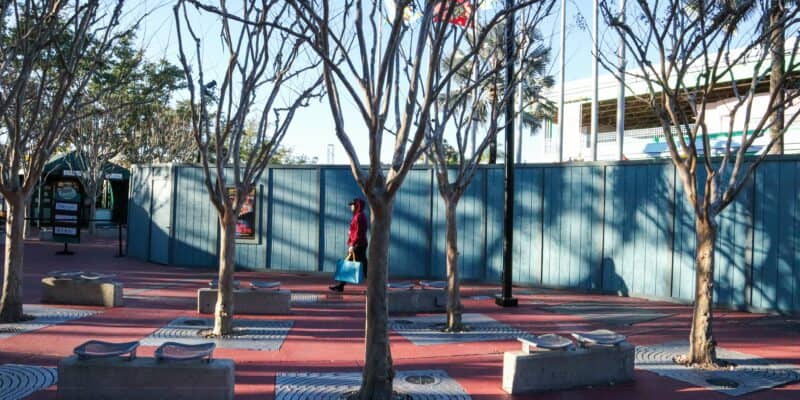 Guests who are visiting Universal Orlando Resort currently are bound to notice construction walls placed around the Parks. Poseidon’s Fury, Caro-Seuss-el, and Jurassic Park River Adventure all are temporarily closed as they undergo refurbishments and construction walls can be seen around the attractions at Universal’s Islands of Adventure.

Over at Universal Studios Florida, Shrek 4-D just closed permanently and now we see Minion-themed walling surrounding the attraction. In addition, Revenge of the Mummy has closed for a lengthy refurbishment that won’t see it reopen until late summer 2022 and the construction walls around that attraction feature posters from all the Universal Mummy movies.

But, now, we are seeing even more construction walls come up at the Universal Park.

Twitter user @EthanHershaft posted photos of new construction walls that can be found outside the KidZone in Universal Studios Florida.

Some new construction walls can be found right outside kidzone! @UniversalORL I freaked out when I first saw them! I thought the whole kidzone area was closed!

Some new construction walls can be found right outside kidzone! @UniversalORL I freaked out when I first saw them! I thought the whole kidzone area was closed! pic.twitter.com/6DaezXna0r

These walls have not shut down any other attraction and the expectation is that Universal Orlando is simply updating the courtyard that can be found outside of Animal Actors On Location!

Even with the closures, Guests who visit Universal Studios Florida and Universal’s Islands of Adventure are treated to a plethora of thrilling attractions including Harry Potter and the Forbidden Journey,  The Amazing Adventures of Spider-Man, Jurassic World Velocicoaster, Skull Island: Reign of Kong, MEN IN BLACK: Alien Attack, The Simpson’s Ride, E.T. Adventure Ride, Despicable Me: Minion Mayhem, Harry Potter and the Escape from Gringotts, Race Through New York Starring Jimmy Fallon, Hollywood Rip It, Ride It, Rock It, The Incredible Hulk Coaster, and many more.

What do you think of the ongoing construction taking place at Universal Orlando Resort?