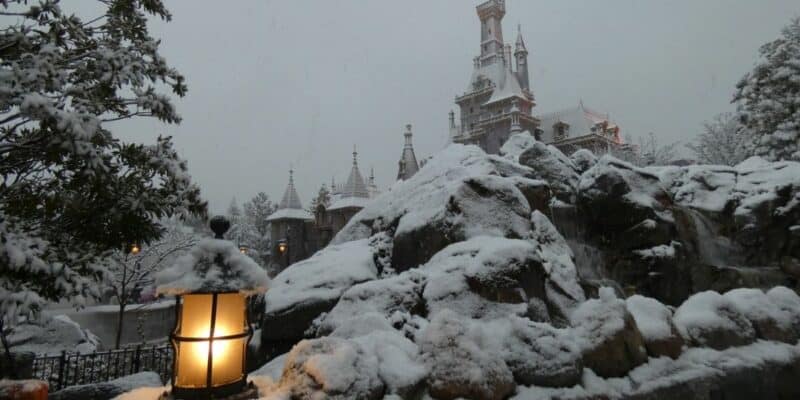 At Tokyo Disney Resort, things are starting to look a lot like Christmas, even after Christmas!

When we think of snow at a Disney Resort, we often do not associate it with Walt Disney World Resort. The closest thing that sunny Central Florida will ever get to a snowfall is a snoap fall! Because of this, it is often shocking to see a Disney attraction or castle covered in flurries. Walt may have chosen Orlando and California for their warmer climates and lack of snow, but there are many Parks around the world that do have snow which leaves the Disney Park looking like it is something out of a fairytale!

Disneyland Paris has been the main snowfall photo spot this year when it comes to a winter wonderland at Disney, but now Tokyo Disney is shaking over! We can see Cinderella Castle is covered in heavy snow with giant flurries falling down all around, which is an interesting sight to see as their castle is almost a carbon copy of Walt Disney World’s castle. Belle and Beast’s Castle is also covered, which actually fits well into the story of the film as there are snowy scenes in the movie!

Thanks to DLP Welcome (@DLPWelcome), we can see what this snowfall is looking like!

Because the snow is such a rare site for many Guests, it is a big deal to see Tokyo DisneySea and Tokyo Disneyland covered in flurries!

With COVID-19 ramping up, it seems that overseas Park’s are starting to have to decide what their next move is. Although Tokyo Disney and Disneyland Paris seem to plan to stay open, Hong Kong Disneyland will be closing for at least two weeks with no set reopening date.

What do you think of this snowfall? Let us know in the comments below.