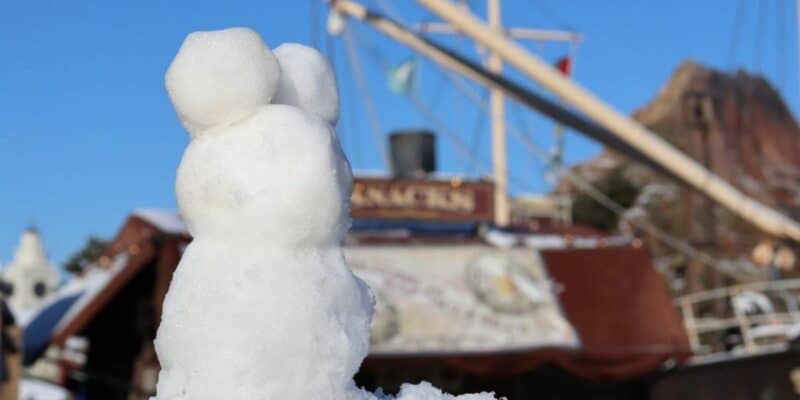 Do you want to build a snowman? Someone call Anna and Elsa because it seems like we have found some Guests who would like to, and they are at Disney!

When Guests visit Disney, the idea of building a snowman probably seems insane, and that is because many people associate Disney with Orlando, Florida, where it is typically always hot and sunny. But, they forget that there are a ton of Disney Parks worldwide, some of which include snowfall from time to time. Disneyland Paris often tends to see some flurries as well as Tokyo Disney!

We have seen Tokyo Disneyland Park and Tokyo DisneySea covered in quite the snowfall this week. DLP Welcome (@DLPWelcome) has provided even more photos of the Parks covered in snow. As we have already reported, Splash Mountain was seen covered in snow, with the attraction actually running, but no Guests seemed to want to get on.

Below, we can see the Partner statue of Walt Disney and Mickey Mouse covered in snow in front of Cinderella Castle, as well as an adorable snowman with Mickey Mouse ears!

It seems that some Guests wanted to decorate the Park a little more by adding the adorable snowman. Olaf even came to life in
あふ (@ahumohu) Tweet below. These snowmen were done so well, it seems likely that a Cast Member constructed the Frozen character!

With COVID-19 ramping up, it seems that overseas Park’s are starting to have to decide what their next move is. Although Tokyo Disney and Disneyland Paris seem to plan to stay open, Hong Kong Disneyland will be closing for at least two weeks with no set reopening date.

What do you think of this snowfall? Let us know in the comments below.