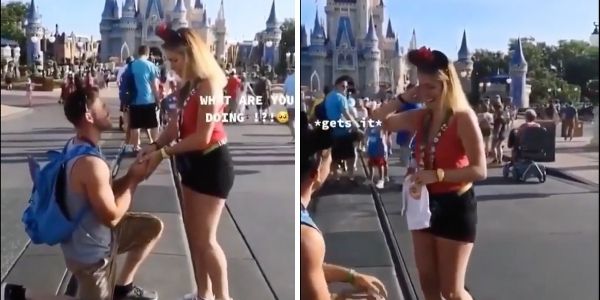 There might not be a more special or magical place to propose or get married than at Walt Disney World. The name alone is synonymous with fairy tales and princesses, making it a perfect destination to celebrate true love. This is why we see so many proposals and weddings happen while at the Disney Parks.

While most proposals are pretty standard, typically in front of Cinderella Castle at the Magic Kingdom, a recent one will be sure to shock you as much as the future groom was.

A recent post on the r/Unexpected sub-Reddit has gone viral with 111 thousand upvotes. The video shows a Guest proposing to another Guest while at Walt Disney World, but this isn’t your typical Disney World proposal story. See the full video below:

As shown in the video, the man gets down on one knee to propose, only to be left waiting while the woman remains standing. A few more seconds pass and the Woman still hasn’t said or done anything, until she pulls out something from her bag. Eventually, we find out that this is a baby shirt and that she’s pregnant, what a reveal!

Whelp they spent all that money on a trip and now she can’t go on half the rides hahah.

Cinderella Castle is an iconic and special place that symbolizes everything Disney stands for so it makes sense people would want to commemorate their engagement in front of it. As stated above, Walt Disney World and Disneyland are both hotspots for proposals as they are “the most magical places on earth”. This doesn’t mean proposals always go to plan, however, with even one potential groom being left behind!