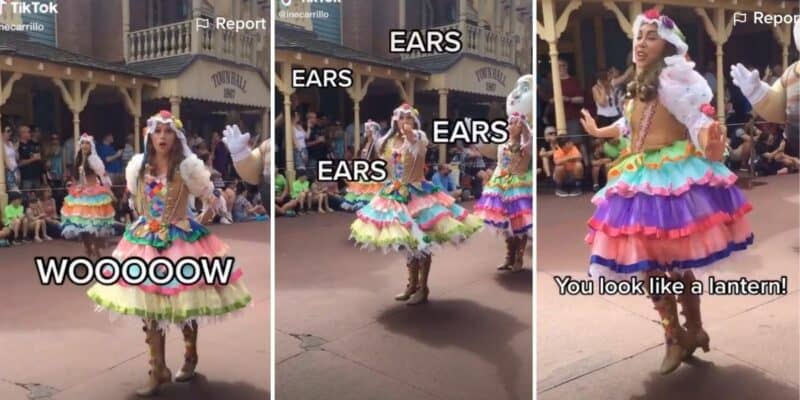 One of the best parts about visiting Walt Disney World is that the Parks are full of fun performers and Cast Members that can make a good day a great one.

Although parades have not yet fully returned to Walt Disney World, we do know that Festival of Fantasy is on its way back to Magic Kingdom. Until then, Guests can enjoy daily cavalcades, which have different Disney characters such as Mickey Mouse and the Fab 5, or the Disney princesses and more saying hello to Guests. These cavalcades almost act as if they are mini parades which run quite often, and during them, Guests can sometimes get interactions from the characters!

Although there are choreographed aspects, the characters are often looking out into the audience and interacting with Guests, just as they did during parades. Inecarrillo (@inecarrillo) posted a TikTok of some of the characters during the Tangled section of the Festival of Fantasy parade freaking out over their Mickey ears! We can hear the performers shout “EARS EARS EARS” while another notes that the Guest looks like a lantern, “and that’s a compliment.”

Although we do not know what the ears looked like, I think it is safe to say that they were likely themed to the film! Perhaps they, too, were the floating lanterns that Rapunzel and Flynn set off during their “I See the Light” ballad.

Moments like this happen often, and bring a smile to Guests’ faces, which is yet another reason why Disney Cast Members are so magical. Characters who are performing dance numbers but not required to say specific lines during parades such as these are often some of the best ones to interact with, as they are on the ground level!

In terms of entertainment returning, we do not know precisely when the offerings return, but it seems that it will happen at some point in 2022, which is fantastic news! This follows fireworks returning to Disney World, as Guests can now enjoy Disney Enchantment at Magic Kingdom, as well as Harmonious at EPCOT. We also found out that Fantasmic! would be returning to Disney’s Hollywood Studios!

Are you excited to see parades and shows return to Magic Kingdom?