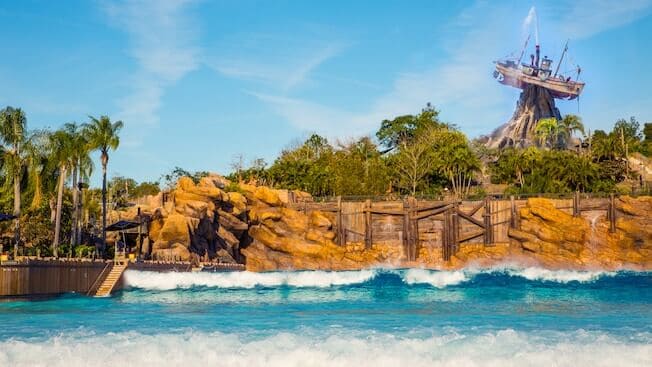 If you were planning on jumping into the wave pool at Typhoon Lagoon today, tomorrow, or for the rest of the weekend, we would suggest making other plans.

As many have been feeling, the weather in Orlando has not been too warm. There has been a ton of wind and chills for Disney World Guests to experience, leaving many ditching the shorts and tank tops for a warmer option. We just reported that Central Florida will also be receiving an arctic blast this weekend. As we noted, a New England snowstorm will leave a cold front on route to Orlando.

[The storms] trailing cold front will send frigid temperatures down the Florida Peninsula. High temperatures Saturday will occur at midnight before falling into the 40s and 50s for the afternoon.

Most of Central Florida will then wake up in 20s and lower 30s Sunday morning. A few outlying areas north of Orlando could bottom out in the teens. Temperatures in the 30s will be possible as far south as Miami.

When the temperatures dip to something this low, many, as you can imagine, would not find a water park so appealing. The cost to keep the Park open would likely end up putting Disney in the negatives for the day financially, as their may even be more Cast Members than Guests. At the moment, Typhoon Lagoon’s hours show that the Park is currently closed now through to Sunday. It is currently set to reopen on Monday, however, that availability is subject to change, depending on the weather.

We suggest always checking the My Disney Experience app during to cooler months before heading to Typhoon Lagoon. At the moment, Typhoon Lagoon is the only waterpark open on Walt Disney World property as Blizzard Beach is under refurbishment. Typhoon only recently reopened after a near two year closure from the pandemic. During its closure, it seems refurbishments were done as well.

Miss Adventure Falls, a fast-paced family raft attraction created, as the story goes, when Captain Mary Oceaneer – a seafaring treasure hunter – got her haul caught years ago in a rogue typhoon, scattering her treasure across this tropical paradise.Crush ‘n’ Gusher, a thrilling water coaster featuring three 400-foot-long tube slides named for the various fruits they once transported.

That being said, Walt Disney World Resort pools have been open on days where Typhoon Lagoon has remained closed, so those looking to brave the cold may still have a chance to take a plunge, or enjoy their Resort’s hot tub!

Would you want to go swimming at Disney World during a cold front like this? Would you use a hot tub?