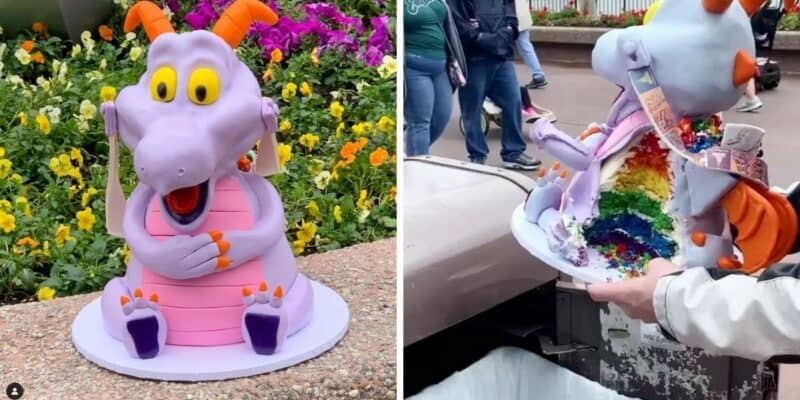 Let’s celebrate! The Figment fandom has shown its colors in the last few days, as lines for the new Figment Popcorn Bucket reached six hours; a longer wait than any attraction! The demand for Figment (and therefore Dreamfinder) caused a spark of imagination in baker Jillian of JillyCakes, and she created a full-size Figment Popcorn Bucket Cake, complete with candied popcorn and carrying strap!

After the hours-long Pop Eats Figment queue at Disney World’s EPCOT International Festival of the Arts, baker Jillian of the award-winning JillyCakes decided she had to expand upon her imagination. Figment “infiltrated” her heart, and she baked him up with great care and in full scale. Her first photo presentation on Instagram resulted in the post above, reading:

How vivid is your imagination? What do you see in your dreams?

After all the crazy figment popcorn bucket frenzy of Friday afternoon this guy infiltrated my heart and I needed to set him free! Here’s the first (of many) amazing photos of this guy!

Introducing the CAKE Version of the now viral #figmentpopcornbucket .

This creation truly healed my soul after a very hard week. We all have a figment in our own imagination, look within yourself and set it free.

Jillian and her crew brought the Figment Popcorn Bucket Cake to the International Festival at the Disney Park in a large box on Sunday, January 16, 2022, despite the chilly weather. Of course, bringing your own food to the Disney theme parks is allowed, as long as you disclose the items, which was easy to do as Figgy arrived in a large white box. Jillian performed a near-surgical unboxing past the turnstiles, in order to get photos of her creation in his inspiration spot.

Related: It’s Time For Dreamfinder to Return to Journey Into Imagination with Figment

The cake was colored perfectly, being a tower of rainbow cake layers and vanilla buttercream, complete with a popcorn door on his back, filled with candied popcorn. And what would a popcorn bucket be without its strap? The hand-crafted fondant strap even has connector points to Figment’s head and drapes around his body, just as the real bucket would. The eight-hour-long creation was made in one day (the previous day, Saturday) and only his body was rainbow cake. His little purple dragon head was modeling chocolate-covered foam (to keep him light) and his rainbow popcorn “compartment and wings were fondant covered cardboard and only his actual body itself were the layers of rainbow cake.”

When it came to her dragon-shaped popcorn bucket cake, the baked dessert went viral with Disney Guests almost immediately. From photographs all over the Park to the final slicing with a Festival of the Arts plastic knife, Figment had a big day, and ultimately, the crew decided he wasn’t food safe after being drug all over the Park. The hot topic photograph of them finally tossing Figment in the trash went crazy, and prompted Jillian to create a post about his journey around EPCOT.

Let’s go on a #behindthescenes Journey with Figment!

I’ve seen a few folks concerned by the viral “trash can” post of figment after we sent him back to our imaginations and before it gets out of hand I wanted to bring in some context.

After an extremely long and difficult week of regular orders, late Friday evening figment called out to me from the 7hour bucket frenzy line and I got it in my mind and my heart that I absolutely had to make a cake version. As an artist, when inspiration strikes you have to act fast!

He was created with LOVE and to be a silly fun art event. With the true spirit of the #festivalofthearts I spent 7-8hrs lovingly sculpting and creating him on Saturday. He was much more engineered than a traditional cake since I knew we would have him outdoors and moving around alot. So only his body was cake. His head was made of a foam core covered and sculpted with @satin.ice modelling chocolate. The popcorn compartment and wings were fondant covered cardboard and only his actual body itself were the layers of rainbow cake.

When we brought him to the park we knew he would have a wild but short journey, and he ended up bringing joy and smiles to hundreds of people in his nearly two hour long tour and photo shoot. A cast member approached after the initial unboxing and explained that for liability reasons we could take all the pics we would like but he could not be served to any guests outside of our party.

As you scroll for some behind the scenes shots of his adventures you can see that he had been on every curb, trash can, fence post, table, even the ground. So by the time we cut him (with a plastic festival booth knife) he was definitely not what could be considered food safe any longer. But his journey was about bringing joy, smiles and love, not calories.

So after the five of us each ate a small piece we gave him a formal goodbye, back to our imaginations. May the spirit of whatever you are passionate about live on in your heart and manifest in your life.

Cheers to everyone, including the little Figment of MY imagination ❤️

Did you see the JillyCakes crew walking around EPCOT this weekend with the Figment Popcorn Bucket Cake? Leave us a comment below with your thoughts on the dessert!