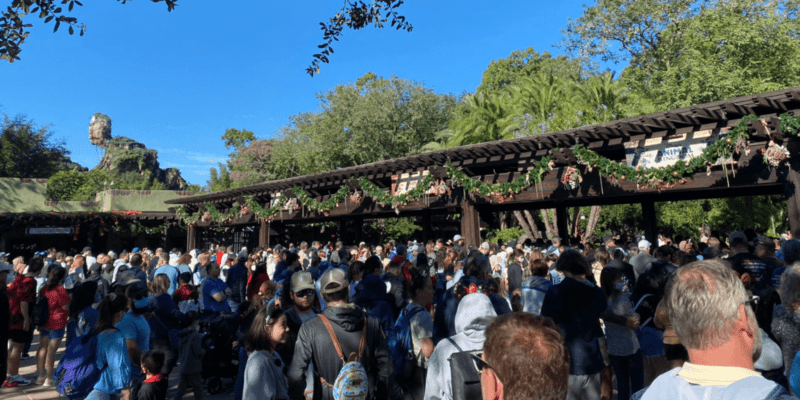 The state of Florida, which is home to many theme parks and vacation destinations including Walt Disney World, reported record-breaking new COVID case numbers on Christmas Day, and those cases continue to increase.

However, despite the COVID cases continuing to rise as the new omicron variant is spreading like wild fire, crowds continue flocking to the Most Magical Place on Earth — Walt Disney World.

As we start the new year, Guests were spotted outside of Disney’s Animal Kingdom this morning, January 3, waiting for the theme park to officially open. The crowd levels are clearly increasing despite COVID cases rising.

Theme Park Express shared a photo of the crowds outside of Animal Kingdom this morning, writing:

Just a little bit busy trying to get into Animal Kingdom today pic.twitter.com/qbohuTlsR1

Despite the new omicron surge, it is clear that many families kept their plans and are visiting Walt Disney World as we begin the new year. Guests were lined up early in attempt to be one of the first into Disney’s Animal Kingdom this morning so they could enjoy everything the Park has to offer, including Avatar Flight of Passage, Expedition Everest, DINOSAUR, and more.

At this time, we do not know what capacity the Parks are operating at. Earlier this year, Walt Disney Company CEO Bob Chapek confirmed that the theme parks have started increasing capacity, which you can read more about here, but again, we do not know exactly what percentage of capacity Disney World is operating at.

If you have plans to visit Walt Disney World in the near future, make sure you familiarize yourself with the current rules and regulations at the theme parks. Walt Disney World’s current safety rules can be found here.

Are you visiting Walt Disney World this week? Are you worried about the omicron surge? Let us know in the comments below.