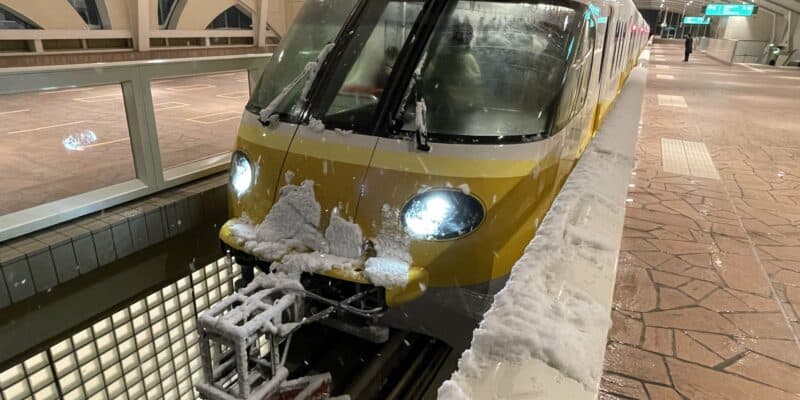 If there is one thing that Walt Disney World and Disneyland Guests are not used to, it’s seeing the theme parks covered in a beautiful white snowy blanket as Florida and California are used to warm weather and sunshine. However, even though the U.S. Parks don’t see snowy theme parks, other international Disney Parks are used to having snow impact the Park operations.

Recently, we reported on snow falling at Tokyo Disney. Now, we are seeing the Monorail transform into a snow plow due to that storm.

Twitter user @Itami9018F shared photos of the Monorail at Tokyo Disney, which attached a snow plow to the front so that it could continue operating even after the massive snow storm that hit the theme parks.

With the current surge of COVID-19’s variant, omicron, the Disney Parks overseas are beginning to change operations to ensure the safety of Guests and Cast Members. While Tokyo Disney and Disneyland Paris continue to operate as is, Hong Kong Disneyland has already announced they will be closing for at least two weeks with no set reopening date.

Inside the Magic will update you as we get information regarding the Disney Parks and the current omicron surge.

Do you wish to see a Disney Park covered in snow in person? Let us know in the comments below.