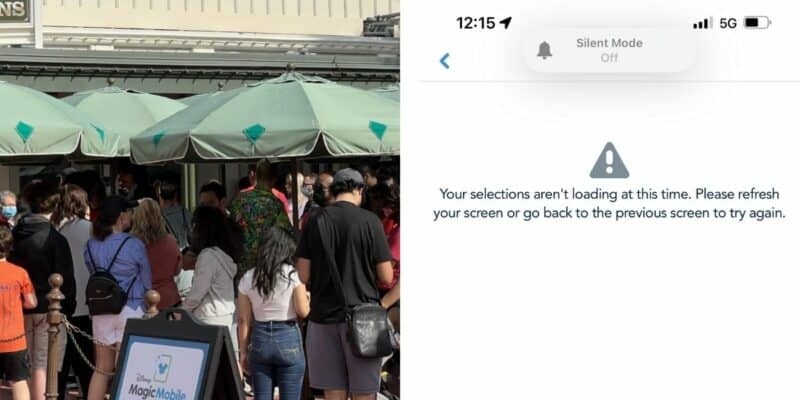 With holiday crowds and technical issues surrounding the Walt Disney World Resort, Guest Services lines are wrapping around the entryway of Magic Kingdom!

It is no surprise that Disney World is very busy at the moment. Until school is back in session, many Guests are here on their holiday vacation, which means that even with a capacity limit (which is currently unknown), Guests are finding themselves in massive crowds. On top of this, we are seeing some more technical issues arise with Guests who are using Disney Genie or trying to.

Disney Genie also has Disney Genie+! For $15.00 per day person at Disney World, you can skip one standby queue at a time by booking your reservation for the Lightning Lane line, which is the new FastPass queue. You can only book one reservation at a time or one every hour, but remember to start this early in the morning as we have seen attractions sell out of Lightning Lane spots by mid-afternoon!

As we have reported in the past, some Guests want to see Disney Genie turned off entirely as they noted suggestions were ruining their experience and messing with their plans, and now, it seems that more complaints are continuing to roll in. Some of the Inside the Magic team is currently vacationing at Walt Disney World, and upon attempting to use Disney Genie for the first time, we have noticed that out of four phones, only two are functioning correctly when it comes to Disney Genie.

We are having issues purchasing Disney Genie+ for two Guests, as well as being unable to make ride selections for attractions for those who have been able to purchase Disney Genie+. Then, some My Disney Experience apps as a whole are not working correctly as we cannot see wait times.

Now, we are seeing huge lines at Guest Services at Magic Kingdom. Although this may be for a variety of reasons, since Disney Genie is seemingly consistently causing an issue for Guests, there is a chance that multiple people in line are there to fix issues they are experiencing on the My Disney Experience app.

We now received a message that the Disney account system is having a problem while on Disney’s WiFi network.

Have you found any issues while using Disney Genie? What are your thoughts?