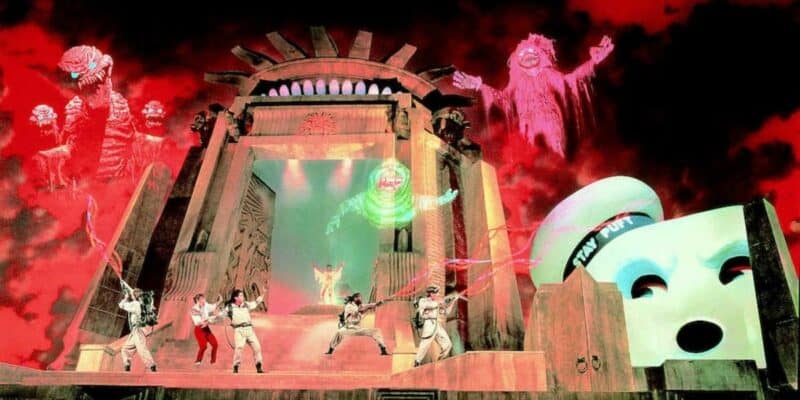 When it comes to theme parks, Disney and Universal take the cake for innovation and technology for many who visit. Each Resort has different qualities that they bring to the table, but innovating and creating the next best thing is a practice they both share. Now, it seems there is something else the two have in common.

When Walt Disney and his team of Imagineers were creating the Haunted Mansion for Disneyland, the team was trying to figure out how to realistically have ghosts appear in the room. The technology to make this happen was not yet available, but the desire to make it happen was far greater. Imagineer Yale Gracey found a way to make the old Peppers Ghost trick work for the attraction, which uses lighting and mirror effects to create a see-through reflection for Guests.

The old #Ghostbusters show at #UniversalOrlando utilized the classic Pepper’s Ghost effect. Such a great effect.

By using this effect, the Ghostbusters were able to make it look like they were actually sucking up ghosts and catching them, bringing the film to live on stage at Universal Orlando Resort. Ghostbusters Spooktacular opened in 1990 with the Universal Studios Florida Park and would last until 1996, when Twister would take over the area.

Now, although Ghostbusters is a very popular IP Sony IP, Universal fans love the story as well. We tend not to see stories heavily represented at Universal Orlando Resort, unless it is Halloween, however. In the past, we have seen Ghostbusters used in Halloween Horror Nights; however, it was not seen at this year’s event. Ghostbusters films have become increasingly more desired over time, and now Ghostbusters: Afterlife (2021) is the next movie to add to the collection.

What do you think of this trick? Let us know in the comments below!