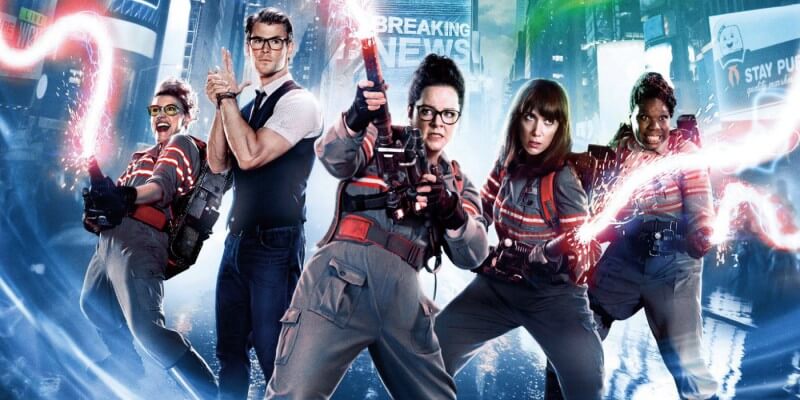 It seems like every single film critic is trying their absolute hardest to make any commentary about Ghostbusters 2016 center around the swarm of controversy regarding an all female cast…or the fact that it’s being made at all. But let’s be honest, that’s not fair to the hard work and love that went into this movie. So let me just throw this out there: this new iteration of Ghostbusters does nothing to delete or erase the history of the franchise.

So let’s get into the review!

Chances are, you’ll know whether to trust my opinion or not based on my first bit of feedback: I actually enjoyed much of the reboot better than the original. Blasphemy, right? It’s just one guy’s opinion, but in a time of cinematic grandeur plagued and oversaturated by computer animation and gimmickry, how the hell could a reimagining of one of the worlds most beloved films be any good whatsoever? The answer lies in its cast and director.

Director Paul Feig (Bridesmaids, Spy) conducts Kristen Wiig, Melissa McCarthy, Kate McKinnon and Leslie Jones with such trust and adoration in their individual talents, that it fortunately works in spades to counter the film’s otherwise pretty basic storyline. These folks came to work, they came to make the funny, and most importantly, they came to kick ass. This isn’t a movie desperately trying to live up to some sort of standard held by its predecessor. It’s a handful of talented people just doing what they’ve done best for the better part of their careers. It doesn’t want to be Ghostbusters from the 1980s. It wants to celebrate the fact that the original existed at all, and fill that very world with fresh faces to both revitalize the thrill and create something completely (but respectfully) different. Oh! And Chris Hemsworth’s lovable idiot, Kevin, is the moronic hunk receptionist we didn’t know we needed. He’s hysterical.

The plot is relatively familiar, but merely acts as a container for the wonder and chaos of the universe being crafted here: Erin Gilbert is a genius professor at Princeton University who falls into cahoots with her old friend Abby Yates, as well as her business partner Jillian Holtzmann. Equal parts savant and psycho, McKinnon’s Holtzmann is arguably the greatest part of this movie. Throw in streetwise — but not racially/stereotypically so — Patty Tolan, and our ragtag heroes are pit against unstoppable forces of the afterlife and a plot that could mean the end of New York City as we know it. From a paranormal showdown at a metal concert to spooky-vibrant chaos in the streets of midtown Manhattan, Ghostbusters is constantly throwing fresh and creative set pieces filled with unapologetic spectacle at the audience to keep the momentum alive. That would be well and good on its own, but there’s also a spitfire script holding everything together. It’s all about the dialogue, and I found myself repeating quotes to myself the entire ride home.

The truth is, I’m actually going to have to dig real deep to remember the last time when I’ve walked out of the theater feeling so completely surprised and satisfied. The character development was fantastic (and lovingly took its time), the jokes were snort-laugh-worthy and felt very natural, and every single actor came to work. Haters be damned: this is the Ghostbusters reimagining that we all deserve, and I can’t wait to see what the future hold for this franchise. And that Fall Out Boy theme song that we’ve all come to despise? In context of the film, it actually works. I hate myself for saying it, but it almost pokes fun at it’s own ironic bombasticness within the scene. Surprises all around, right? Right. It’s also worth nothing that I got something from this movie that I don’t think we’ve experienced in any other iteration of Ghostbusters: we actually saw these ladies “busting” ghosts. As in, straight-up brawling with them. Not just catching these spectral baddies, beating the living (dead?) tar out of them. Holtzmann’s Photon Whip might be one of the most badass cinematic moments I’ve ever seen on screen. It’s pure “video game” and I devoured every millisecond of it. The buildup to this insanity is smooth-as-butter and it’s beyond rewarding seeing our heroines go from complete zeroes to ghostbusting superheroes.

So who you gonna call? These ladies. The new Ghostbusters movie delivers on all fronts, and sets the stage for an inevitable sequel (stay after the credits for some major fan service). The writing is sharp, the acting talent is there in spades, the CG embraces it’s own absurdity, and it successfully brings this insane world to a new generation.

Comments Off on REVIEW: “Ghostbusters” is the reboot we all deserve