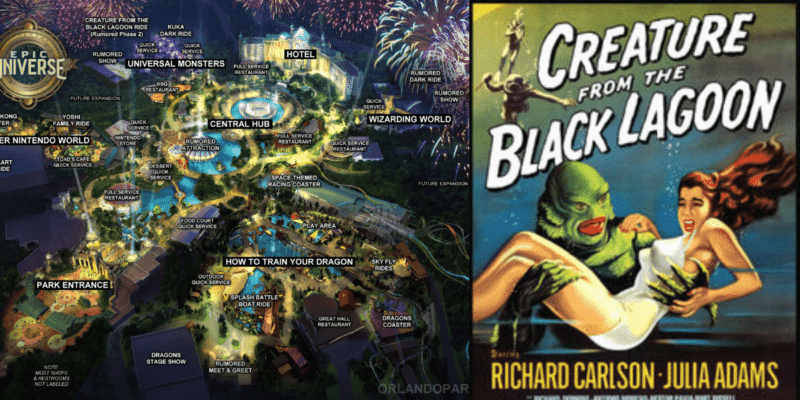 Could a Universal Pictures classic be making its way to the Universal Orlando Resort in the future?

Rumors are running rampant when it comes to the Epic Universe theme park that is currently in its early phases of construction at Universal Orlando Resort and there has been some significant news this week as we look forward to what attractions may be included in the new Park.

New patents were acquired by Universal for a KUKA swing-arm attraction this month for what rumors have assumed will be a Universal Monster ride.

The patent, seen below, looks similar to the seats that are found in Harry Potter and the Forbidden Journey in Universal’s Islands of Adventure. Still, there is a belief that these updated ride patents will be more accommodating for Guests and there’s a vibe to them, at least in the sketches with the spikes at the top of the in particularly, that they could be themed for a classic Universal monster ride like Frankenstein (1931) or Dracula (1931).

Reporter Alicia Stella released a new look at the speculation map for the Epic Universe and shared that the rumored ‘phase 2’ for the Park could be the addition of a Creature from the Black Lagoon (1954) ride in the Monster World.

“As part of this story, a new version of the Epic Universe speculation map has been created! Possible Creature from the Black Lagoon expansion added (as people ask what phase 2 is rumored to be) and Wizarding World VR removed (as it’s possibly moving to Universal Studios Florida).”

As part of this story, a new version of the Epic Universe speculation map has been created! Possible Creature from the Black Lagoon expansion added (as people ask what phase 2 is rumored to be) and Wizarding World VR removed (as it's possibly moving to Universal Studios Florida). pic.twitter.com/JlY9FaJ4fN

In addition to the speculation of adding Creature from the Black Lagoon, the Wizarding World VR experience– which has been rumored to be a part of the Epic Universe– may be moving to Diagon Alley at Universal Studios, speculatively of course.

If a Creature from the Black Lagoon were to be added, it would be an interesting choice for Universal.

While monsters like Dracula, Frankenstein, the Mummy, and even the Wolfman are more popular with the younger generation because of remade films, the Creature from the Black Lagoon is one that has not been retold by Universal yet.

There have been plans for remakes several times in the past, but none of those have ever come to fruition. Guillermo del Toro briefly developed a remake with Universal, but after his pitch was rejected he used the same Gill Man ideas for the original film The Shape of Water (2017), which won the Oscar for Best Picture.

The IMDB official synopsis for Creature from the Black Lagoon says this:

Remnants of a mysterious animal have come to light in a remote jungle, and a group of scientists intends to determine if the find is an anomaly or evidence of an undiscovered beast. To accomplish their goal, the scientists (Antonio Moreno, Richard Carlson, Richard Denning, Whit Bissell) must brave the most perilous pieces of land South America has to offer. But the terrain is nothing compared to the danger posed by an otherworldly being that endangers their work and their lives.

While there are no solidified plans for a remake of the movie yet, the idea that Universal could be floating the monster out as a Phase 2 ride in the Epic Universe– which likely would put the attraction’s debut at least a half-decade off from now– gives the impression that we will be seeing one come to fruition in the future.

What do you think of the rumored Universal Monsters World in the Epic Universe?