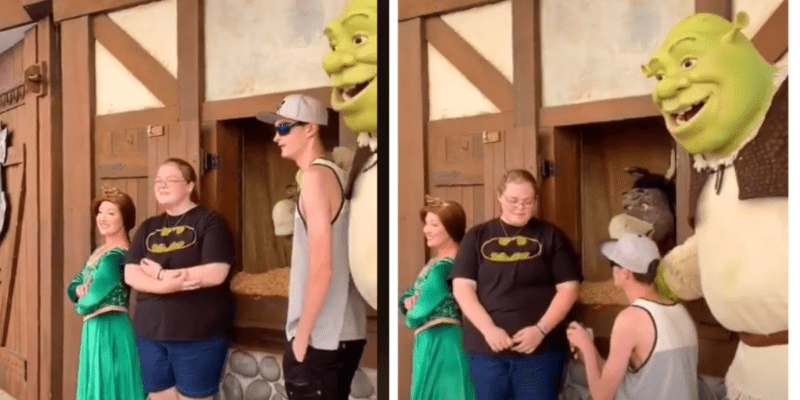 You may not think of Shrek as the romantic type, but that doesn’t mean he can’t help others find their ‘happily ever after.’

Many think of Walt Disney World and Disneyland as the prime places to pop the question, but this couple had a completely different idea in mind.

TikTok user @kitty_lee_12 posted a video of their proposal at the Shrek, Fiona, and Donkey meet-and-greet at Universal Studios Florida.

here’s the whole video! It might not be what everyone wants but it was perfect for me ❤️ #fyp #fullvideo #proposal #shrek

Reply to @ashlynzi here’s the whole video! It might not be what everyone wants but it was perfect for me ❤️ #fyp #fullvideo #proposal #shrek

After an emotional ‘yes,’ we can see Shrek, Donkey, and Fiona all congratulate the happy couple. What a unique proposal that certainly won’t be forgotten. There are often a ton of proposals at Walt Disney World, especially in front of Cinderella Castle at Magic Kingdom, but we think this one is equally as magical.

The popular attraction Shrek 4-D is just a matter of weeks away from its permanent shutdown. The show, which has moving seats and special effects in a theater setting, has been around since 2003 and features Shrek and Donkey on a chase to rescue Fiona from the clutches of Ghost Lord Farquaad. The ride was set following the first film, and characters from the sequels– Shrek 2, Shrek The Third, and Shrek Forever After— were not mentioned in the attraction.

Universal Orlando Resort, which has since opened attractions based on movies like Harry Potter, Jurassic World (2015), Despicable Me (2010) and others announced that the attraction would be closing on January 10, 2022. There has been no confirmation on what might replace Shrek 4-D in the future, but in Universal Studios Hollywood, the attraction was replaced with DreamWorks Theatre, which has a preshow featuring several popular DreamWorks characters and then a main show starring Kung Fu Panda.

While Shrek 4-D may be going far, far away, the good news for Shrek fans is that the ogre, his wife, and his noble steed will still be around to interact with Guests at Universal Orlando at meet-and-greets like the one above in the video.

What do you think of this special Shrek proposal at Universal Studios?