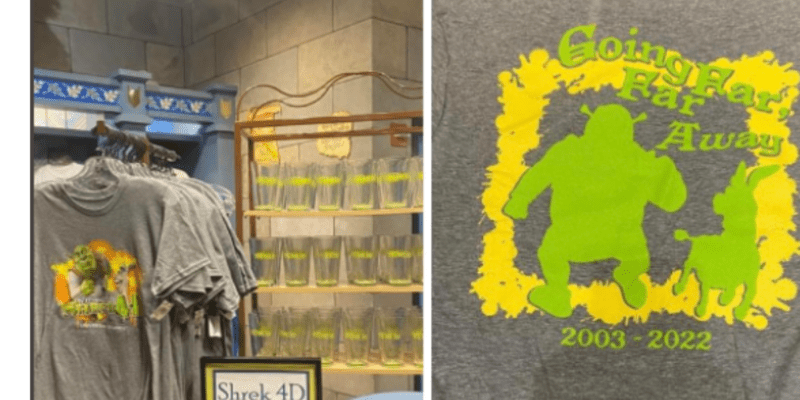 A staple at Universal Studios will soon be giving its last ride.

Since its debut in 2003, Shrek 4-D has been one of the most popular attractions at Universal Studios in Orlando and the big building– which features large posters with Shrek, Donkey, Dragon, and Fiona– is one of the first sights noticed every time Guests walk through the archway at the Park.

Universal announced earlier this year that Shrek 4-D would be permanently closing in early 2022 and, just recently, farewell t-shirts have appeared in the gift shop that Guests exit through on their way out of the attraction.

If you’d like to pick up one of these shirts, they are selling out fast and it doesn’t appear that Universal will be getting another shipment. The price is $27.00 and they are being marketed as “while supplies last.”

The last day to ride Shrek 4-D will be January 10, 2022. The ride takes Guests on a wild ride with Shrek and Donkey as they race to save Princess Fiona, who had been kidnapped by Ghost Lord Farquaad. The ride was set following the first film, and characters from the sequels– Shrek 2 (2004), Shrek The Third (2007), and Shrek Forever After (2010)— were not mentioned in the attraction.

Universal has not made an announcement yet as to what will replace Shrek 4-D, but when the ride closed in Universal Studios Hollywood, it was replaced with The DreamWorks Theatre.

Will you be riding Shrek 4-D and picking up a farewell t-shirt before the attraction closes in January?