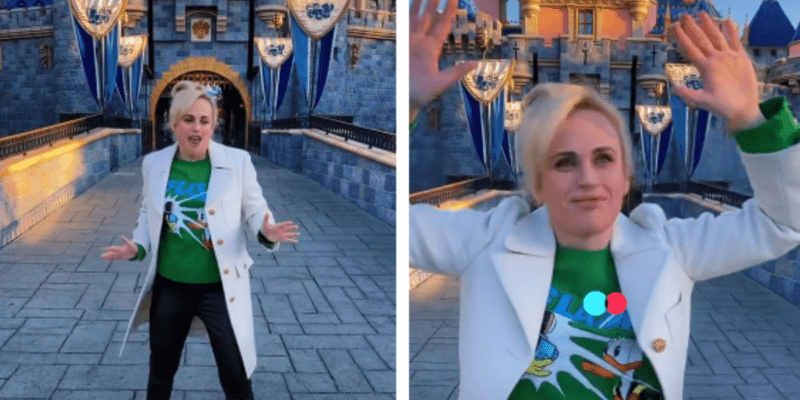 You never know what celebrities you might see at Walt Disney World Resort or Disneyland Resort.

There are seemingly videos each month that Guests take of celebrity sightings in the Parks and some lead to viral encounters, such as when Kylie Jenner shut down an entire Disney attraction to ride.

Popular actress Rebel Wilson (@rebelwilson) recently posted a video on TikTok of her dancing in front of the Sleeping Beauty Castle in Disneyland. She said:

The video, which was posted just hours ago and likely taken before the Park opened, already has close to 100,000 likes. It shows Wilson showing off her dance moves to the song “Friend Like Me” from Aladdin (2019), which was performed by Will Smith.

A thrilling and vibrant live-action adaptation of Disney’s animated classic, “Aladdin” is the exciting tale of the charming street rat Aladdin, the courageous and self-determined Princess Jasmine and the Genie who may be the key to their future. Directed by Guy Ritchie, who brings his singular flair for fast-paced, visceral action to the fictitious port city of Agrabah, “Aladdin” is written by John August and Ritchie based on Disney’s “Aladdin.” The film stars Will Smith as the Genie; Mena Massoud as Aladdin; Naomi Scott as Jasmine; Marwan Kenzari as Jafar; Navid Negahban as the Sultan; Nasim Pedrad as Dalia; Billy Magnussen as Prince Anders; and Numan Acar as Hakim. “Aladdin” is produced by Dan Lin, p.g.a., and Jonathan Eirich, p.g.a., with Marc Platt and Kevin De La Noy serving as executive producers. Eight-time Academy Award®-winning composer Alan Menken provides the score, which includes new recordings of the original songs written by Menken and Oscar®-winning lyricists Howard Ashman and Tim Rice and includes new music written by Menken and Oscar and Tony Award®-winning songwriters Benj Pasek and Justin Paul.

Wilson is known for her role as Fat Amy in the Pitch Perfect franchise where she starred alongside Anna Kendrick. She has also starred in several movies and television series, including the 2020 series Pooch Perfect. She has been open about her love for things Disney, including making an appearance on The Disney Family Singalong a little more than a year ago where she sang “Poor Unfortunate Souls,” but has never actually starred in a Disney film. She also was Ursula in the The Little Mermaid In Concert a few years ago.

Disneyland Resort is currently in the midst of one of its busiest weeks of the year.

What Disney movie would you like to see Rebel Wilson star in the future?