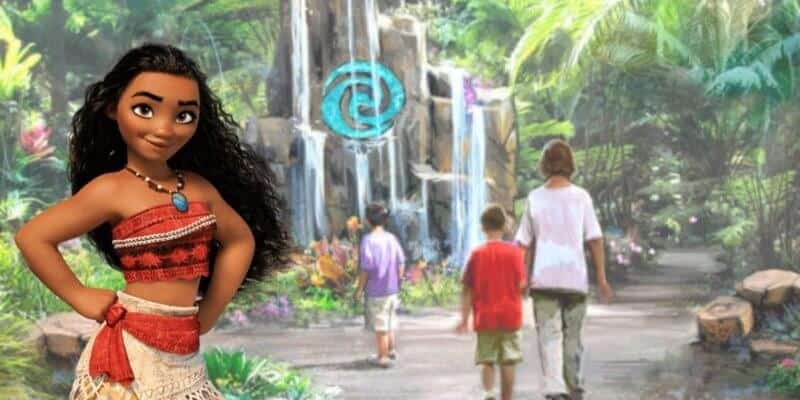 If you are a fan of Moana, you have probably been counting down the days until Journey of Water, Inspired by Moana opens at EPCOT. We have been updating you on the construction progress, and now, thanks to photos shared by Twitter user bioreconstruct, we can see the attraction inching even closure to completion!

For starters, if you are not familiar with the upcoming Moana-inspired attraction coming to EPCOT, it will be nothing like Disney has done before.

In 2019, Disney announced that the all-new attraction themed after the story of Moana would be arriving at EPCOT. The new attraction will be called Journey of Water, Inspired by Moana and, according to Disney officials, will be the “first-ever experience inspired by the Walt Disney Animation Studios’ hit film [and] will let Guests interact with magical, living water in a beautiful and inspiring setting.”

Earlier this year, we reported that the construction site for the upcoming attraction is visible, and ever since, Disney Imagineers have been working hard to complete this project.

Related: What’s Happening With the New ‘Moana’ Attraction at EPCOT?

Twitter user bioreconstruct shared a photo of construction vehicles and workers on site for Journey of Water, Inspired by Moana, which has clearly made a ton of progress since earlier this year. Per bioreconstruct:

Multiple excavators were busy this morning in the Moana Journey of Water area.

Multiple excavators were busy this morning in the Moana Journey of Water area. pic.twitter.com/Aq54OVIiA3

Unfortunately, at this time we do not have an opening date for the attraction. Inside the Magic will continue to update you as we get information regarding Journey of Water.

Please keep in mind that the upcoming Moana-inspired attraction is just that — An attraction, not a ride. Think of it more as an experience. Disney describes the attraction as it “will let Guests interact with magical, living water in a beautiful and inspiring setting.”

The upcoming attraction is based off of the hit Disney animated film, Moana (2016), which is described by Disney as:

Three thousand years ago, the greatest sailors in the world voyaged across the vast Pacific, discovering the many islands of Oceania. But then, for a millennium, their voyages stopped, and no one knows why… Walt Disney Animation Studios’ Moana is about an adventurous teenager who, with help from demigod Maui (voiced by Dwayne Johnson) sails out on a daring mission to prove herself a master wayfinder and save her people.

Are you excited to experience Journey of Water, Inspired by Moana when it opens? Let us know in the comments below.