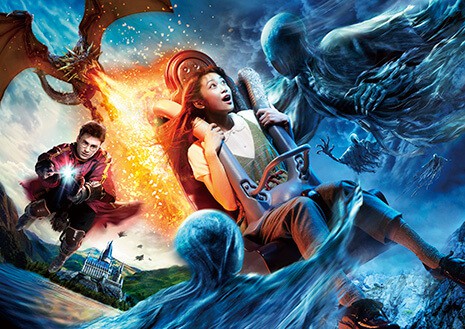 When at any theme park, Guests expect to have an incredible and thrilling themed experience. Universal Studios has raised the bar in this department, offering Guests amazing rides and attractions with its newer Wizarding World of Harry Potter Expansion. Here Guests can live out all of their Harry Potter fantasies and interact with their favorite scenes and characters. Visiting on Christmas makes this even more magical, except when you get stuck on a ride…

It isn’t much of a surprise to Guests when rides and attractions “go down” or are forced to stop, as this is a common occurrence at all theme parks. But when you are visiting Universal Studios on Christmas, you expect everything to go perfectly. This was not the case for one Guest who shared their experience of being stuck on Harry Potter and the Forbidden Journey. __gaga.aaa (@__gaga.aaa) posted the video.

See the full video below:

Related: Universal Guests Stuck Upside Down on Attraction For Over 20 Minutes

The TikTok shows the Guest getting stuck on Harry Potter and the Forbidden Journey which can be found at both Universal Studios Hollywood and Universal Studios Orlando, as well as the international Universal Parks and Resorts. The Guests were stuck for nearly an hour until they are forced to evacuate the ride on Christmas. But hey, the Guest shows that Universal Studios gave them a free food voucher for their troubles, which they used to get one of the famous Lard Lad donuts from the Simpsons-themed area of the Park.

There are so many great experiences waiting at The WIzarding World of Harry Potter, like the incredible Diagon-Alley, The Leaky Cauldron and delicious Butter Beer. Universal Studios describes Harry Potter and the Forbidden Journey as follows:

Soar Above Hogwarts™ With Harry Potter

Enter through the towering castle gates and make your way down the familiar passageways and corridors of Hogwarts™ School of Witchcraft and Wizardry. Visit iconic locations such as Dumbledore’s office, the Defence Against the Dark Arts classroom, the Gryffindor™ common room, the Room of Requirement, and more.

What do you think about this Guest who got stuck on Christmas? Have you ever been stuck for a long time on a ride? Let us know below!