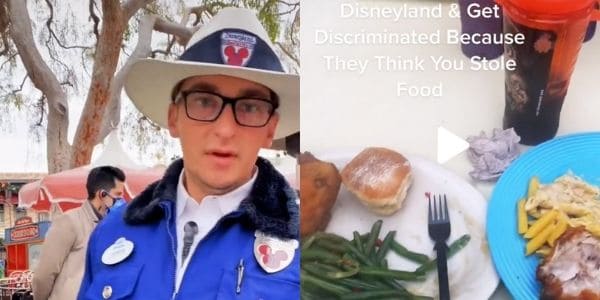 A video was recently uploaded to TikTok, which reportedly shows a family being accused of stealing food at Disneyland.

In the video, we can see security as well as Disneyland Cast Members show up and surround the family as they appear to be dining in the outside area of the Plaza Inn.

The TikTok begins with the caption, “When you go to Disneyland and get discriminated because they think you stole food.” The TikTok shows a family as well as the plates of food that the Guests were accused of stealing, according to this video. In the TikTok, some music is played over the video, making it hard to make out what is being said.

There is strong language used in the video, viewer discretion is advised.

The caption of the TikTok reveals that the family was celebrating the birthdays of their daughter and nephew while at Disneyland. A second TikTok was uploaded, which reveals even more Disneyland Cast Members and Security come over and questioned the family.

Disneyland You Gotta Put Some Respect In My Name

Again, the music played over the video makes it hard to tell what all is being said exactly, but something crucial is happening as there are multiple Cast Members seemingly questioning the family at this point.

Many in the comments asked if the Guest showed the Cast Members their receipt, thinking that would solve the tense situation. User @anjelika101247 commented:

Many users questioned the validity of the claim the Guests made in the TikTok. User @rviv7 commented:

“Something tells me this isn’t the whole story”

“There’s something else behind this. Don’t immediately believe the TikTok Because that’s only their side”

A third TikTok was posted showing what the Guests claim to be the receipt of the meal they were accused of stealing; again, strong language is used in the video:

When questioned again, the Guest posted the supposed transactions that were shown on their bank account as further proof they were telling the truth:

That was the last development in this story, and because of the pieced together information, we are unsure of what exactly happened between the Guest and Disneyland Security. Nothing else was posted on the TikTok account at the moment this was written, so it is unsure of what the truth actually is surrounding the incident.

What do you think of this altercation between Guests and Disneyland Security?