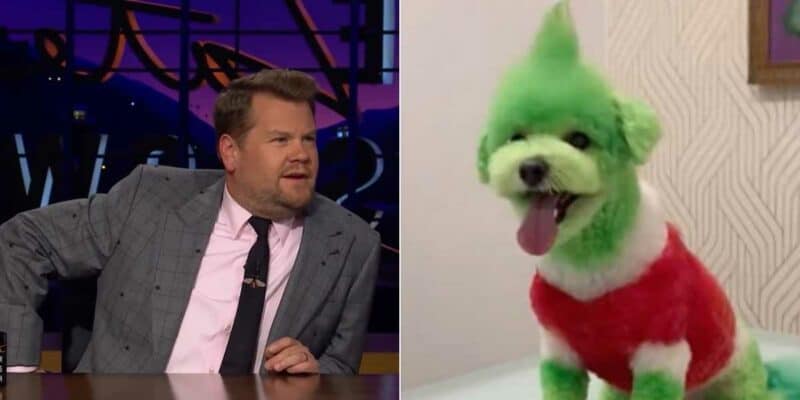 ‘Tis the season! We’re huge fans of all things Dr. Seuss’s Grinch… but how about a Grinch dog… and no we’re not talking about Max the dog. Well, a dog groomer is going viral for turning one of his clients into a Grinch dog and people can’t decide if it’s cute or outrage for the little dog. The Late Late Show with James Corden chimes in on the discussion.

The video that has gone viral was posted by @gabrielfeitosagroomer noting, “When Teddy tried to steal #xmas . #creativegrooming #bichonfrise #doggrooming #doggo #grinchmas #grinchtiktok”. The video of the small dog in green, white, and red dog now has 2.1 million views. Check out the video below, or find it here:

RELATED: The Grinch Is Arrested By Police At A Tree Lighting Ceremony

The comments on the video are mixed. Some say it is super cute for the holiday season and totally fine since the chemicals used are harmless to dogs as shown in the video. Others feel bad for the Grinch dog!

The Late Late Show with James Corden even picked up on the story with Corden asking does anyone think this is actually cute or are they outraged for the poor dog? Corden uses his hilariously fun way to cover the Grinch dog news. Check out the video below where Corden discusses the Grinch dog. (Tip – the Grinch dog discussion starts around the 6-minute mark in the video.)

RELATED: Dog Reacts With Concern While Watching ‘The Lion King’ in Viral Video

This isn’t the first time we’ve seen a Grinch dog appear. Last year, another video went viral with @jacqui_thedoggroomer showing a Grinch dog transformation. Check out the other Grinch dog video below or find it here:

What do you think? Is Grinch dog cute or does it outrage you like it did James Corden? Let us know in the comments.