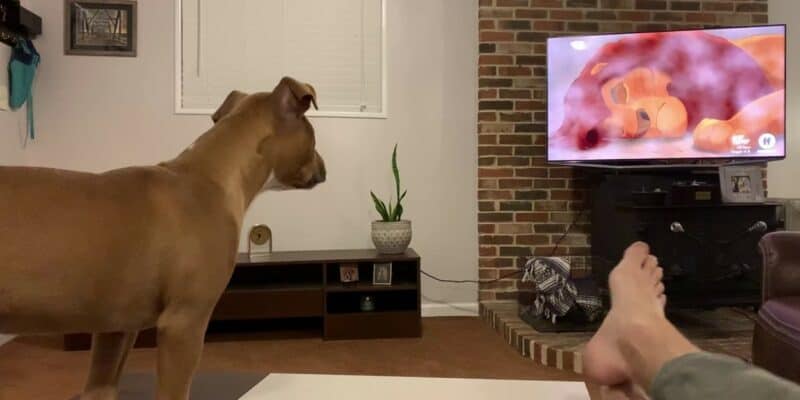 The emotional roller coaster involved in a Disney film is one we know all too well! One second you’re laughing and the next you’re reaching for a box of tissues. Moments like in Beauty and the Beast when Belle whispers, “I love you” to the Beast… or the first 15 minutes in the film Up. Disney knows how to get right to the heart! Well, we Disney fans aren’t the only ones feeling the emotions. YouTuber Josh Myers shared a video two years ago which went viral with 23 million views. Now, the video has resurfaced on social media and we simply can’t get enough of it.

You know the moment. You’re watching the Disney animated classic film from 1994 of The Lion King, and Simba places his trust in his evil Uncle Scar. A stampede occurs. Simba’s father, Mufasa, comes and rescues Simba… BUT (darn you Scar!) doesn’t survive. Simba is left with his dead father. Disney, why do you do this to us?

It looks like this sweet pup felt all the same emotions that we did! Josh Myers shares the video with the following note: “So Hannah and I were watching the Lion King while Luna played wildly with her toys. But right as Mufasa falls to his death, she stops and turns to the TV to watch. To see her crying at the TV was the sweetest thing I think I’ve ever seen. She even lays down right after Simba lays with his dad….We don’t deserve dogs. 4 months old and she’s already showing empathy.” Check out the viral video below:

RELATED: The Real Simba From ‘The Lion King’ is at Disney World

Apparently, Luna, the adorable pitbull isn’t the only one! Dogs reacting to The Lion King became a trend on TikTok. Trend Followers Tik Tok took to YouTube to share a culmination of videos where several four-legged friends reacted to The Lion King in a similar way:

You know The Lion King animators nailed it when man’s best friend feels the emotions.

Have your pets ever reacted to a Disney film? Tell us your story in the comments!